"To our reading of the Scriptures we bring our reason, experience, and the traditions of our faith, feeling down into the truth we trust is there waiting for us." 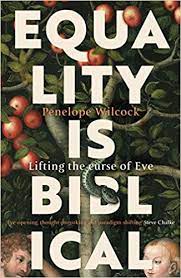 Equality is Biblical is the only book I've read where the questions have been as good as the main text. Usually study questions range from mediocre to dire, with a distinct feeling that they are only there because someone suggested it at the last minute. Penelope Wilcock, on the other hand, provides questions like surgical tools, probing deeply into what you believe and why. The book's main topic is the place of women in the church, but the questions cover everything from how we visualise God to the power of shame in society.

The subtitle of Equality is Biblical is Lifting the Curse of Eve, and a large chunk of the book focuses on Genesis, analysing how the story has traditionally been interpreted, and offering alternative readings of the text. Then there is a look at women in church history, and a discussion of how Jesus and Paul regarded women.
Interwoven with all this are much broader ideas about what faith is - "a wild flower able to put down roots in the crevices of the highest crag"; how to read the Bible - "more like a map than a manual"; and how the surrounding culture influences our assumptions - "once change begins, so do questions... we start to see life differently".
The end result is a book which isn't really just about whether women are equal with men. Instead it uses that question to examine why we believe what we believe, how that changes, and where the Bible fits into all of it.

Well, I'm the sort of person who, faced with a question like, "What imagery do you find helpful when you think about God?" will say, "That's really interesting, let me think about that". Not everyone wants to consider those kinds of things, but I found Wilcock's style of searching questions useful.
I particularly liked one where she encouraged you to write the words Scripture, Reason, Experience, Tradition on four pieces of card, and arrange them to reflect the importance they have for you. I decided that mine was Scripture built on by Reason (scientific knowledge, current moral norms) and Tradition built on by Experience (my own, and knowledge of others' experiences). In that arrangement, it wasn't that Scripture and Tradition were less important, but that they formed a base which was modified by new ideas or encounters. 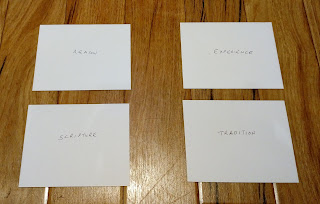 Some of the questions were definitely difficult! Do I think the original state of humanity was sinful or blessed? How do I discern good from evil? What difference does my faith make to standing for gender equality? I felt like I was barely scratching the surface in my response to some of these questions. There is a lot of depth to explore.

For me, Equality is Biblical wasn't so much about being exposed to new ideas, but about looking at the ideas I already hold. Often these are acquired more or less subconsciously. So I think there's definitely value in asking, "What do I think about this? Where did I get that from? Who do I trust when they talk about this issue?"
Wilcock sees the Bible as having a direction of movement which continues into our lives today, so she encourages her readers not only to think about where they are now, but also how they have got there, and what might be around the next corner. As she says, "the search still unfolds, and the Way continues - there is always more to learn".

Will you do something differently?

I read this book alongside Invisible Women by Caroline Criado Perez, which is about the gender data gap. She describes how, in so many fields, men are assumed to be the default and women are "non-standard" which leads to things being designed around men. Sometimes this is just annoying, like phones which don't fit in women's hands, or shelves which are too high. Sometimes it's dangerous: using crash test dummies which are based on the average man means that cars aren't designed to protect women properly.
Leaving women out of the picture is clearly not just a Christian trait. But perhaps, if we believe that God regards women as equally important, it gives us an added incentive to change things. I'm not sure what I will do, yet, but I want to give a quick plug to Lucy Rycroft, who noticed that children's Bible story books were always about men: Noah, Daniel, David. So she wrote Abigail and Deborah and Jael to help redress the balance. Once you see the gaps, it becomes easier to fill them in.

Priscilla. Do you know Priscilla? I was introduced to her years ago, and was delighted. She was a leader in the early church, along with her husband Aquila, but most of what we know about her comes in those snippets at the end of Paul's letters, where he says, "Give my greetings to such-and-such, and tell this to so-and-so". There's a theory that she wrote the Letter to the Hebrews, which I would love to be true, because it's one of my favourite books. Penelope Wilcock mentions Priscilla as one of the women who was recognised and esteemed by Paul.
So, for all the women who have made the church what it is, and often flown under the radar to do so; and for all the women who are trying to make sure that women are seen and valued; for you, I remember Priscilla.

Lucy said…
Thanks for the very kind plug Martha! :)
Loved reading your review too. This is a book I've come across, but not read, so your thoughts on it were helpful (and the gender data gap book sounds very interesting too - I'd recently heard the same about crash test dummies - incredible!!!).
xx
15 January 2023 at 14:34