August 10, 2022
As I stood on the metal platform in my harness, I reminded myself that this wasn't the really big one. That was the one where you swooped for a kilometre over the cluttered heaps of grey slate, possibly with a parachute fluttering behind you to slow your speedy descent.  This one was - I risked a look down - really quite small. I glanced at Theo, next to me, as the man behind us counted down. Three...two...one...
And we jumped. 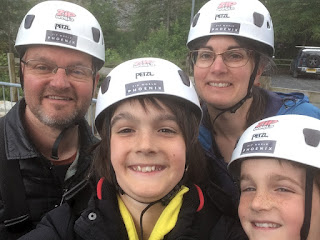 The boys said the zip wire at Zip World Llechwedd was the highlight of the holiday in Wales. Of course, they now want to go back and try out the massive Titan one. "Big Red" was quite big enough for me!
I have to admit that was a good day all round. After our zip wire experience in the morning, we headed over to Criccieth in the afternoon, which was surprisingly hot and sunny. Criccieth has a beautiful big sweep of bay with a castle perched at one end, and the kind of beach where you can spend a long time hopping over rocks and paddling through little channels of seawater. We liked it a lot. 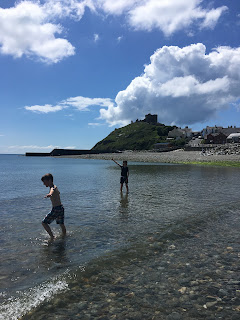 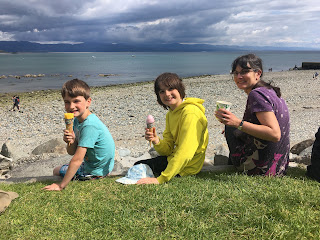 From Criccieth we could almost make out where we'd been the day before - Llandanwg beach, south of Harlech. There's a little church tucked into the sand dunes - St Tanwg's - and we'd wandered across the river estuary at low tide, looking at the boats stranded on the mud. 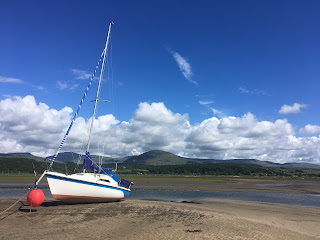 We were staying in a little cottage near Blaenau Ffestiniog. The area was renowned for slate mining throughout the 19th and early 20th centuries, and the industry is still very evident today. There are enormous heaps of waste slate everywhere you look, many large enough to qualify as mountains in their own right. The piles of shattered dark rock were dotted with pink-flowered rhododendrons, which added a cheerful touch to the rather forbidding landscape. 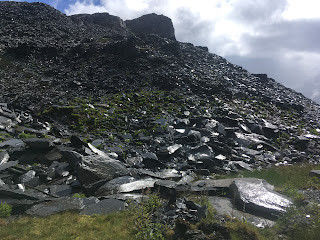 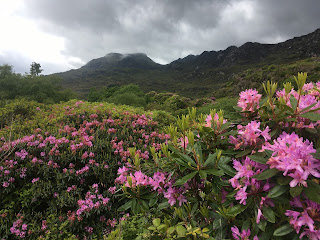 Our walk the first morning took us to Cwmorthin, an enthusiastic waterfall not far from our cottage. Beyond that, we followed a track up the hill to a lake and some abandoned mine buildings. We could have gone much further, but every time the sun looked like it was coming out we got rained on again, and we all had wet feet already. So we scampered back down the hill just in time to wave at the Festiniog Railway train as it pulled out of Tan-y-grisiau station. 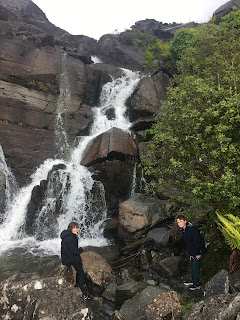 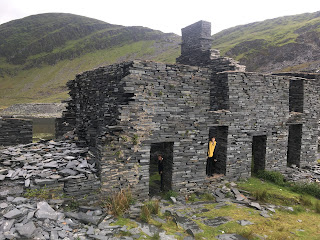 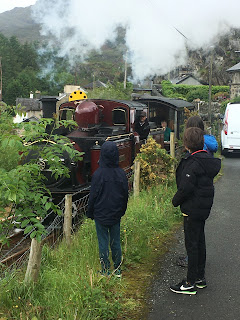 Wet feet turned out to be a theme in the holiday. Our next walk was from Trawsfynydd Lake up to Tomen-y-Mûr Roman fort, on a path which wasn't nearly as obvious as the guidebook made it sound! We floundered around a gorgeous wood where the ground was a mass of mossy humps, found our way out into a sheep field and headed uphill successfully. Then the last field before the fort suddenly turned into a boggy mess, and we each got one wet foot as we discovered the invisible stream among the reed clumps. Fortunately the downhill journey, on a different route, was on reasonably solid ground, and the cafe by the lake was an excellent spot for lunch. 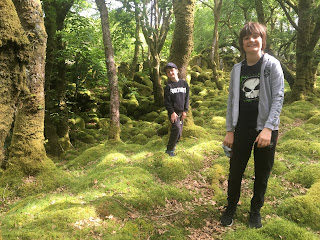 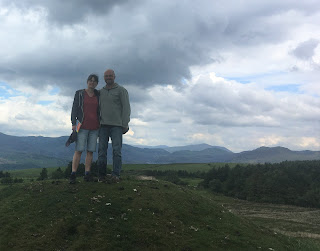 The journey to Snowdonia from Derby isn't an overly long one (although longer than expected on the way there, when a road was closed and we had to take an extremely extensive detour). But it always helps to build in some stopping points. At the start of the holiday we had lunch at Chirk Castle, where we admired the well-kept gardens, the castellated hedges, and the comfortable armchairs. It was tempting to leave the boys in the stocks, but we decided we'd better take them with us. 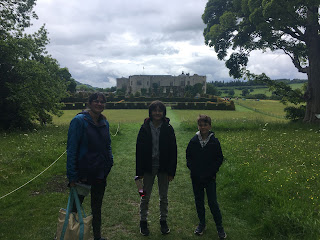 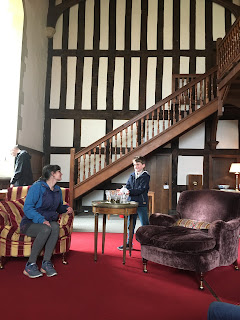 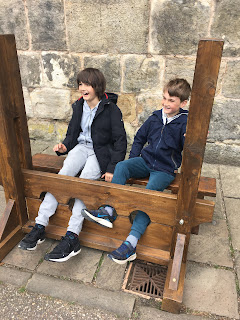 Coming home, we stopped at Bala Lake (also known as Llyn Tegid) for a ride on the steam train from Llanuwchllyn to Bala. It was a nice little trip alongside the lake, although the hour in Bala turned out to be just enough time to walk into town, grab some pasties for lunch, and eat them on the way back to the station.
We then spent a few hours following tractors along single-carriageway A roads on the Welsh border. By that point we felt we deserved another break, so we stopped in at Bridgemere Garden World. It was approximately ten times the size of our local garden centre! Theo decided we needed a very expensive barbecue, Graham was rather taken by the summerhouses, and Toby thought a comfortable recliner would be a good addition. We all agreed that the hot tub which was the size and shape of a river cruiser would not fit in our garden. 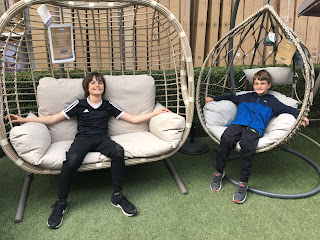 Besides, we said we left empty-handed, we still needed to save up for the zip wire - the really big one.