Cake, canal and cotton: A walk near Cromford

Just before Easter, Graham and the boys received an invitation to join some friends on a canal boat for a couple of days. That gave me the chance to have a rare day out walking - and fortunately the weather cooperated with some beautiful warm sunshine. This excursion fitted all my criteria for a good walk: well-marked paths, beautiful views, interesting things to see, very few people, and even a decent cup of coffee along the way!

I parked at the High Peak Junction car park near Cromford, and started by climbing up through spring-flowered woods, with views across the Derwent valley. 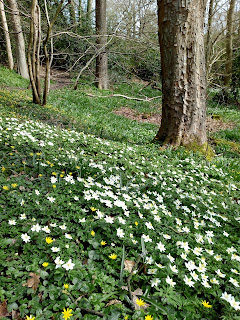 When I came out onto a lane, I discovered a farm with a blue plaque saying that Alison Uttley was born there. On my bookshelf there is a very battered yellow paperback called Magic in my Pocket, a collection of some of Alison Uttley's short stories. They contain some beautifully evocative descriptions of sledging down snowy slopes and walking across moonlit meadows, but I had never connected her with the Peak District. Of course I had to dig out the book when I got home, and re-read the stories in a new context! 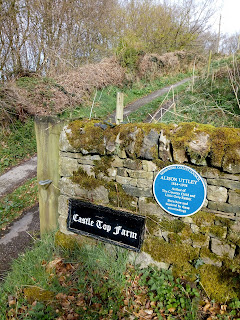 I continued up the hill (more stunning views), then dropped down through sheep fields and across stepping stones to reach the village of Lea. 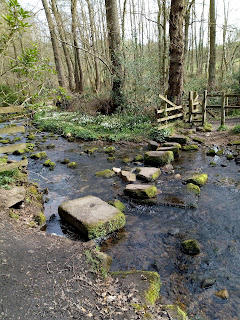 Lea Gardens was a place I'd been wanting to visit for a while. I was just a little early for rhododendron season, which is the garden's chief attraction. There were a few splashes of colour around, though, and some stately trees. Plus a cafe which served me a delicious slice of lime and pistachio cake and a proper bucket-sized cup of coffee. I'd recommend the place for the cafe alone. 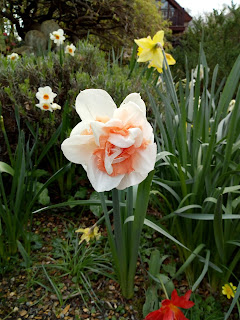 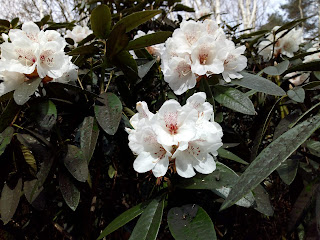 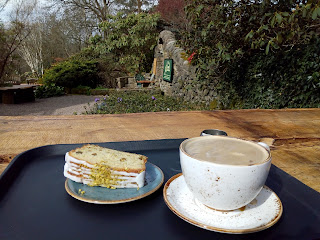 Suitably fortified, I continued across grassy fields, accompanied by skylarks, and along a track from which I could see the end of the tramline at the Crich Tramway Museum. As I watched, a tram nosed its way through the trees and paused to drop off its load of passengers.

From then on it was mostly downhill to the Cromford Canal, passing some old quarries in the woods on the way. 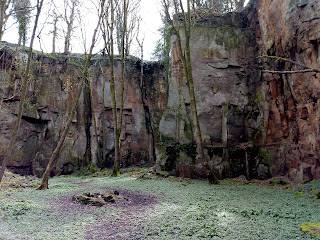 I found a bench by the canal to eat my lunch. A couple of ducks came up looking hopeful, but plopped into the water again when nothing was forthcoming. The canal path was nice and flat, and I was tempted to follow it back to High Peak Junction. Instead I went through a tunnel and then branched off uphill to walk past Lea Hurst, the family home of Florence Nightingale. The house is quite secluded, so I couldn't see much of it, but the parkland was pretty. 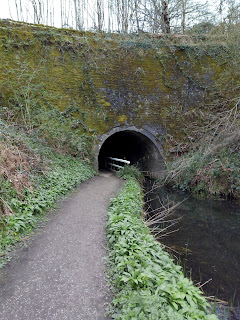 The final interesting sight was the Smedley Mill on the outskirts of Holloway village. Amazingly enough, it is still a working business producing knitted clothing today. It's been manufacturing in the same premises since 1784. The buildings are that mix of practical and historical, renovated and bashed around, that you get when a place is still being used, instead of just a museum piece. 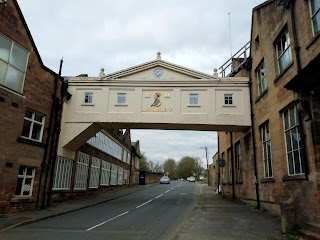 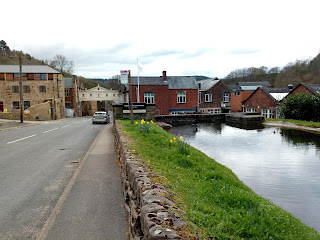 I finished off with a much-needed cold drink at the High Peak Junction cafe. Then I had a phone call saying Toby had been sick, and could I come and pick him up off the canal boat? Oh well, I'd had my day out, and a very nice one it was too.