"Hagar in the desert reminds all of us that the Spirit can be found in the places we least expect: with the poor, the outcast, the enslaved people, the domestic help, and the foreigners. God is present with anyone who is treated as a human resource instead of a human being." 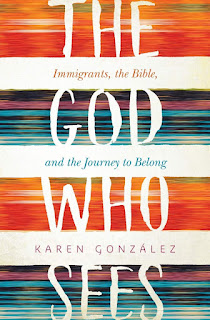 The God Who Sees: Immigrants, the Bible, and the Journey to Belong by Karen González is the third of my spiritual formation books this year. (It was meant to be fourth, but after battling through The Imitation of Christ I decided I needed something easier to read.) González moved from Guatemala to the USA with her family when she was a child, escaping the civil war in her home country. She currently works for an organisation which supports immigrants and refugees. Her book intersperses her own story of relocation with reflections on the Bible and the experiences of people she has worked with.

The chapters of The God Who Sees alternate between Bible stories and sacraments. The Bible chapters look at characters such as Abraham and Sarah, Ruth, and Joseph, highlighting their status as vulnerable migrants, and inviting us to draw parallels between their situations and those in the current day.

In the other chapters, González uses the sacraments of her childhood Catholic faith - baptism, communion, anointing the sick - to tell her personal story. She talks about her family's struggles to adapt to a new country and culture, and also reflects on how that affected her journey towards God.

It was easy to read!

Well, it was a relief to read something written in modern English. Karen González tells her stories engagingly and concisely. In the introduction, she talks about how she complained that there weren't many books about immigration written by immigrants, until a friend finally said, "Maybe you should write one, then!" I felt like she did a good job of balancing her own personal experience with facts about the wider situation in the United States.

It was also interesting to hear about her experiences of different churches. Although it's not the main focus of the book, she refers to her first communion in a Guatemalan Catholic church - "I wanted to wear my pretty white dress and know God"; the Black Pentecostal church in Los Angeles where she was baptised - "Welcome to your new life in Christ, little girl!"; and the InterVarsity Christian Fellowship at college - "I began to read and study the Bible and actually understand some of it". González clearly values and respects the various expressions of faith that she encountered through her life.

I felt like The God Who Sees sometimes implied that all immigrants are fleeing violence or poverty, and are severely disadvantaged in their new country. For example, González asks, "Are you involved in close relationships with immigrants as equals?" and suggests that the effort to befriend them might be "awkward". That jarred with me, because she seemed to be reinforcing the stereotype that immigrants would be cleaners or garbage collectors, with poor English and an impenetrable culture.

In fact, in America, three-quarters (77%) of immigrants are there legally, while almost half (45%) are naturalized US citizens, according to Pew Research. About half are proficient in English, and while incomers from Mexico and South America are generally less likely to have finished high school than US natives, those from other nations are as likely to have a university degree as the average American.

It's difficult, because of course there are many immigrants who, like González' father, are highly educated but can only find menial jobs, or who live for many years in their new country without really ever getting to know people outside of their cultural community. I don't want to downplay their hardships, or forget that a hand reached out in friendship can be a lifeline to someone who feels totally dislocated.

But for a book which is trying to show immigration in a positive light, I felt like she could have done more to emphasise that many people move countries for more positive reasons than escaping from war and hardship.

My previous knowledge of Guatemala was virtually zero, so I learned a few things about González' country of origin. There was also information about immigration law, although mostly geared towards the US.

In the UK, although we certainly have a lot of hostility towards immigrants, I think churches generally are quite positive towards them. I know of initiatives to help refugees, to support those who are trafficked, and to campaign for more humane laws. By contrast, González obviously assumes that many of the American Christians she is talking to are likely to condemn undocumented migrants as law-breakers, and that they are in favour of strong border protection and highly restrictive rules. That may well be true, especially as González herself admits that she used to think that America shouldn't admit any more immigrants. But it left me feeling like I was already familiar with many of the ideas she proposed. Certainly the concept that God has a particular regard for outsiders and foreigners wasn't a new one for me.

Will you do something differently since reading this book?

I'm not sure. González helpfully provides some suggestions of things to do at the back of her book. These include visiting immigrants in detention, giving to charities, and considering the language you use - whether it humanizes people or dehumanizes them. I don't feel like I have a lot of time to engage with an extra "cause", but I certainly hope to make people feel more human and more seen, wherever they come from.

Near the end of The God Who Sees, Karen González describes the Latin American Christmas tradition of Las Posadas, in which the journey of Mary and Joseph seeking shelter is reenacted. The couple representing Mary and Joseph knock on doors around the town and sing a song asking for shelter. At each place they are refused, until finally someone lets them in and there is a party to celebrate.
She says, "Las Posadas is a beautiful Advent tradition... that ministers and immigration advocates have begun to use to represent the lack of hospitality at the U.S.-Mexico border. Their version is called La Posada sin Fronteras: Shelter without Borders." There is a beautiful video about the ceremony on the Sojourners website, and I think that image will stay with me - the image of groups of people on opposite sides of a reinforced border fence, surrounded by guards, singing songs of welcome and hospitality, in hope.