"I have never met a soul who has set out to satisfy the Lord and has not been satisfied himself.  It is impossible." 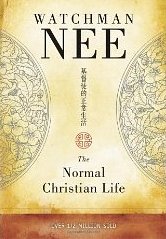 The Normal Christian Life by Watchman Nee is the first of my four books for spiritual formation that I'm reading this year.  Watchman Nee was a Chinese Christian who was converted in 1920 and was able to spend many years in preaching and evangelism.  However, after the Communist revolution he was imprisoned, and died in jail 20 years later.  The Normal Christian Life is based on talks he gave in Europe in the 1930's.

Nee starts by saying that it's possible that the normal Christian life has never been lived by anyone except Jesus - which is hardly an encouraging beginning!  He then goes on to outline his view of such a life, using the book of Romans as a guide.

He certainly sets a high bar: for Nee, the normal Christian life is based on a knowledge and experience of death to our old self through the cross of Christ; of coming to the end of our own resources and relying totally on Jesus; and of giving up our deepest desires to pour ourselves out for Him.

Watchman Nee has lived the life he talks about, so he isn't just describing what we should do and know as a Christian, but what he actually has done and learned.  He is also careful to emphasise that God works with each of us individually, though, so we will grow in different ways.  I particularly liked his section on the Holy Spirit at Pentecost.  Nee points out that the experience of the disciples then (tongues of fire, speaking in other languages) was completely different to the experience foretold by the prophet Joel (dreams, visions, prophecies) and yet they knew instantly that this was the same Spirit.  Likewise, we will all have different experiences - he quotes some famous Christians - so we should be open to the ways that God will work in different people.

I also liked Nee's emphasis on Jesus as the one we are seeking.  God doesn't make us patient or humble or kind so that we are better people - we become those things as we become more like Jesus.  Likewise, we shouldn't be trying to have some great spiritual revelation for the sake of it, but only as it gives us a greater knowledge of Jesus.

Finally, the language and ideas are clear and easy to follow.  I felt that I understood what Nee was trying to say, even if I didn't always agree with it.  It's not the kind of the book where you get to the end and think, "It sounded great, but I'm not sure what the point actually was"!

The theology in the book leans strongly towards the Reformed tradition, with talk about the Blood, the Cross, and the Law (with obligatory capital letters).  I can see the value of that presentation of what Jesus has done, but it's never been the one which resonates emotionally with me.  It also puts a very stark divide between what is sinful and what is redeemed.  He goes so far as to say, "The greatest negative in the universe is the Cross, for with it God wiped out everything that was not of himself."  It may be my postmodern mindset, but I struggle to get my head around that.  I would think of the cross as redeeming creation, rather than wiping everything out and starting again.

Some of the language is also a little dated, particularly a section about Adam in chapter 12 where Nee confidently states that "what God desires above all things is a man".  Um, what about the other half of the human race, then?  You can't even make a convincing case that he meant "human", given that the rest of the argument is all about Adam, without mentioning Eve at all.  I felt he leans rather too heavily on Genesis chapter 2 anyway, which is a slightly different issue.  But I don't think you have to agree with all of Nee's theology to learn a lot from his faith.

The key point - that the normal Christian life is a life totally submitted to Jesus and focused on pleasing him, which we can't do by ourselves but only by his Spirit working in us - really shouldn't be new.  That's basically it, whichever direction we come at it from, but we do need reminding frequently.

There were a couple of ideas which were new to me.  In chapter 7 Nee talks about Jesus' death being like the first grain of wheat which dies and produces more.  Jesus, he says, went from being God's only son to being his first-born son, because by his death God made us all his children.  I don't think I'd ever heard that parable of the wheat linked with the cross before.

Nee also talks about the church in chapter 12, and comments that, "In Christ, the things we do not know, others do, and we may know them and enter into the enjoyment of them through others."  It's a reflection on the idea of the church as the body, with each part having different functions.  I've usually heard that glossed as "you're good at one thing, I'm good at another, we all need to work together" - but I rather like the idea that we all know different things, too, and by coming together we are able to get a fuller view of Jesus.

Will you do something differently since reading this book?

The final two chapters are incredibly hard-hitting.  One talks about having to lose our trust in ourselves in order to fully trust in Jesus; the other uses the story of the woman pouring perfume over Jesus to talk about "wasting" our lives for Jesus - giving him far more than seems necessary.  That final idea is particularly poignant given that Watchman Nee would later "waste" the rest of his life in prison for his faith.

I can feel the reluctance in myself to both ideas.  Do I really want to come to the end of my own resources?  What would wasting my life on Jesus look like?  Am I not leading a life which is good enough, holy enough?

All those questions lead back to the quote with which I started this post.  "I have never met a soul who has set out to satisfy the Lord and has not been satisfied himself.  It is impossible."  Watchman Nee proved this in his own life and experience.  Am I willing to prove it in mine?