Playing with Pendulums, or, Why Science is Great

April 19, 2020
Yesterday I hooked some nuts onto an old paperclip, tied it to a piece of string, and hung the string from a windowsill outside my house.  When I lifted it to one side and let go, it swung, just as I knew it would, ticking smoothly and silently from side to side until it settled again in the vertical position.  I smiled with satisfaction.

The boys, of course, weren't anywhere near as enthusiastic when I suggested we could measure the length of time that the pendulum took to swing to and fro.  They managed a few half-hearted observations before running off to the trampoline again.  But my brain was starting to remember a few hazy physics facts, and I was intrigued.  Shortening the string obviously reduced the swing time, but by how much?  Could I figure out what the relationship was?  I shortened, measured, measured again, made a few calculations, drew a graph... ah yes!  Now I remembered what this was like... 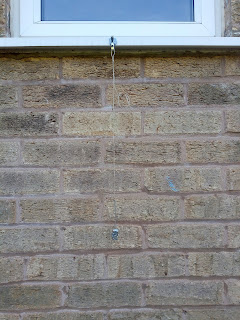 It's been quite a while since I did science in any formal sense, but this little experiment reminded me why I enjoy it.  Interestingly, the reasons are very similar to why I enjoy being a Christian, even though many people would see the two as completely different.  Here are my reasons.  What do you think?

In my first year at university, I studied a module on astronomy.  One of the projects was to observe a variable star - one which changes in brightness over time.  Every night, as I walked from the dining hall to my room, I looked up, located the star, and estimated its brightness compared to two nearby stars.  That was it.  No special equipment, no travel to exotic locations, just looking, noticing, and writing it down.


Tying a piece of string to a windowsill isn't much harder.  Or mixing vinegar and bicarbonate of soda, or watching a bee fly.  However many times it's been done before, there's always a thrill in doing it yourself and discovering that yes, it really does work like that.  And if you look carefully enough, there's always the possibility that you might see something that no one else has ever seen before.

Likewise, the fundamentals of Christianity are pretty simple.  Love God.  Love your neighbour.  Follow Jesus.  You don't need any equipment or special theological knowledge to get going.  Just a little bit of observation and an eagerness to learn more.

2. It's so complicated, you can learn for a lifetime

That variable star, Delta Cephei, is, amazingly enough, one of the ways that astronomers can measure the size of the entire universe.  And pendulums lead you very quickly into gravitational force and simple harmonic motion, so before you know it you're thinking about planets whizzing round the sun, electrons carrying current along a wire, or even teeny-tiny bonds jiggling about inside a molecule.

Wherever you get into science, you can find threads of discovery which will lead you out among the galaxies, down to the tiniest particles of matter, or into the most intricate properties of materials.  You can spend a lifetime studying a single species of beetle, or you can dip into geology, chemistry, astronomy and biology.

In comparison, it can be easy to think that the Christian faith is pretty well fixed.  Believe x, y, and z, don't do a, b, and c, and don't ask too many questions.  This might be the case if we believed in a God who laid down the law at some point in the distant past and then let us get on with it.  However, as theologian Lesslie Newbigin describes it, "The knowledge which Christian faith seeks is knowledge of God who has acted and is acting."1  There are endless new situations in which we are called to follow Jesus, endless discoveries which change what we thought we knew about God.

3. It makes you part of a story

In science, almost every experiment looks back into history as well as forward to discovery.  If I move a magnet in and out of a coil of wire to produce an electric current, I am reminded of Michael Faraday, the first to do the same thing and work out what was happening.  DNA, that most modern of molecules, is inextricably linked with the names of Rosalind Franklin, James Watson and Francis Crick.  In calculations, I might use Avogadro's Constant, Boyle's Law or Carnot's Theorem - all harking back to their original discoverers or popularizers.

Like every story, it contains some mythology - Newton's apple, Archimedes' Eureka! - some moments of enduring genius, some bits we'd rather forget ever happened, and some parts that we've had to revisit to give proper recognition to those who were airbrushed out of the plaudits.  But whenever we do science, we place ourselves in this story.  These are the people who came before us, this is how they thought and worked.  This is the tradition that I am now carrying on, and the knowledge that I hope to pass on to those who come after me.

Well, it doesn't take a Faraday or a Franklin - or even a St Augustine or a Mother Teresa - to see the similarities with Christianity.  Both give us a way of seeing the world, a sense of our place in it, and a reason for what we do.  For many Christians and scientists, the two stories overlap, each informing the other.

4. It joins you to a worldwide community

Both science and Christianity have been dominated by white male Europeans or Americans for several hundred years (just think of the names which spring to mind first), but they are spread much more widely than that.  At the academic level, many research papers will credit people from different nations, either those who have travelled to work together, or because of collaborative efforts between universities across the world.  For amateurs, citizen science sites like Zooniverse or SciStarter recruit volunteers to count penguins in photos, analyse star pictures, or track the effect of Covid-19 on oceans.

Even if you are working alone, science is never done in isolation.  The results of one experiment only make sense when shared with, compared to and repeated by others who are doing similar work.  Those others might spot mistakes or have insights that you never would have discovered by yourself.

Christianity, of course, has a name for this worldwide community - the church.  Most churches are connected in some way to others in different countries.  They pray for each other, share news and support each other.   Our faith in God grows and widens as we realise that Christianity isn't just restricted to our culture's interpretation of it.  God is discovered by theologians in Venezuela, pastors in the Philippines, and youth workers in Singapore - and by us, right where we are, too.

5. It makes you ask what and why

What happens if this changes?  Why does that work one way but not another?  Why is the sky blue?  What do penguins do in winter?  Science gives us a way of asking questions about the world around us, and a set of tools to try to answer those questions.  It arouses our curiosity about the things we see every day, encouraging us to understand what we see at a deeper level.

And it gives us a set of values to judge the results against.  Can someone else repeat the experiment?  Have we guarded against all possible errors?  Have others in the field looked at the results and agreed with our conclusions?  In this way new and startling theories gradually become accepted truth.  We gain a new place to stand, a different way of asking what and why.

In a similar way, our Christian faith gives us a place to stand and ask questions from.  By following Jesus we are encouraged not just to accept the world as it is, but to try and understand God more deeply through it.  Our questions are often more complex and unanswerable than those of science, going to the heart of who we are.  Why do we suffer and how do we meet God in it?  What is good and why should we do it?  Who is acceptable to God and why?  And we test the answers against what we know of God as revealed in Jesus.

What do you think?

It's surprising how many thoughts can come out of a single swing of a pendulum.  Have you discovered or rediscovered anything that you enjoy exploring lately?  How many of my reasons resonate with you?  And what kind of story and community are you part of?

1 Lesslie Newbigin, The Gospel in a Pluralist Society