September 17, 2019
We boarded the plane to Gran Canaria with 2 suitcases, a rucksack apiece, and a few loads of expectation swinging from our shoulders.  It was the first holiday abroad since Toby had started school, and Graham and I were hoping it would be worth the extra hassle and expense.  We were looking forward to seeing a different part of the world, but aware that family holidays are never quite the oasis of rest and relaxation that we still, somehow, found ourselves hoping for.  Meanwhile, the boys had learned the Spanish for ice cream, and were happily chanting, "Helado, helado por favor."

Well, we do like a bit of sea.  Graham went scuba diving, the boys paddled, and I swam and got splashed a lot. 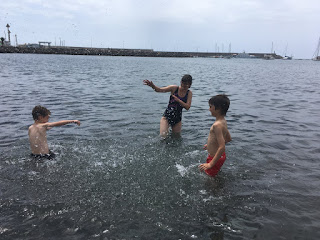 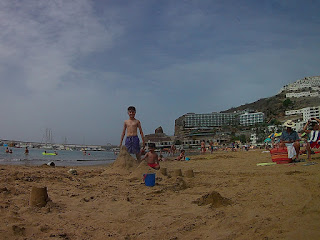 One day we caught a boat to Puerto de Mogan, a few miles along the coast from where we were staying.  It was a lovely little port town, with colourful flowers swinging over our heads, and colourful fish almost swimming under our feet as we hung over the edge of the docks.  We climbed steps past higgledy-piggledy houses with singing canaries outside, and got a birds-eye view from the platform at the top.  At the other side of the valley was La Cañada de los Gatos, an excavated cluster of indigenous houses dating back over a thousand years.

We may have relied rather heavily on cheese and salami for lunch, but on the whole, we ate pretty well.  As we sat outside in the warm evening air at El Guanche Grill, on the second night, it was the first time we felt like we really were relaxing and enjoying ourselves.  The tasty Mexican food helped, too. 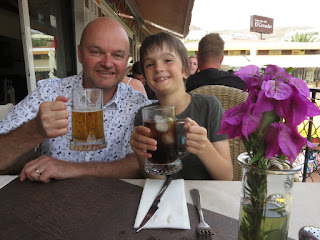 There was a good bbq at the hotel one night, followed by a show by the Acrobattys, a couple of ladies who could do the most spectacular contortions.


And Graham and I treated ourselves to an amazing platter of tapas in Puerto de Mogan - followed, of course, by ice cream. 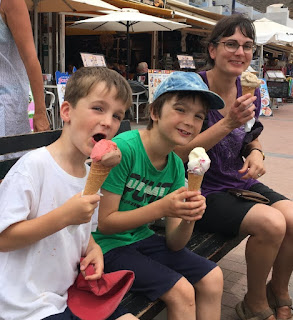 Once we actually got there (see The bad bits) we really enjoyed Cocodrilo (Crocodile) Park.  The BIG zoo on the island is Palmitos Park, which was relentlessly marketed on every bus stop and road sign, but Cocodrilo Park is part zoo, part rescue centre for animals seized by the Spanish government.  It was nicely laid out, mercifully shady, and just about the right size.  We got to stroke a few of the animals and watch the crocodiles being fed.  If they weren't quick about grabbing the food, the feeder would bash them on the snout with a raw chicken leg to get their attention! 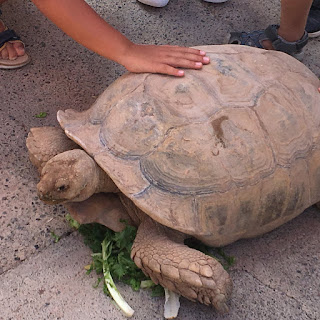 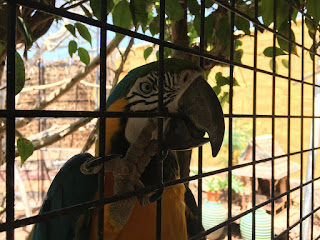 As always on holiday, we seemed to spend a lot of time buying more food.  Outside the supermarket was a little stand where you could rent a Theo-sized car, with a Toby-controlled remote to drive it around.  Of course we had to splash out and let the boys have a go.  They loved it. 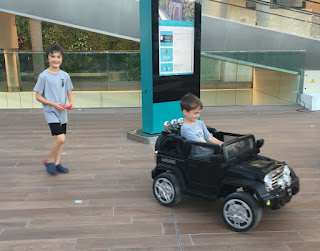 You didn't expect that, did you?  We all enjoyed our visit to the Museo Canario in Vegueta, a town just south of Las Palmas.  It had a collection of pots and tools from the pre-Hispanic era, a reconstruction of an aboriginal house (with a virtual-reality viewer which fascinated Theo) and, bizarrely, a room full of skulls in glass cabinets.  With our limited Spanish, we never quite worked out where they had all come from, or whether their descendants had minded them being put on display. 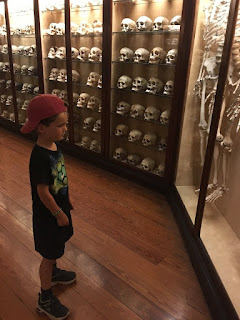 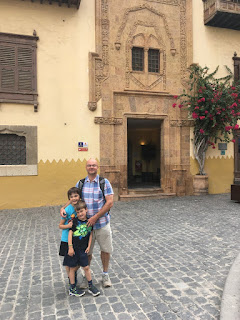 It turned out our hotel had entertainment almost every night until 11:30pm - right outside our apartment.  Very loudly.  The only way to attempt to sleep was to close all the windows, at which point the rooms became instantly hot and stuffy.   Trying to get an early night meant lying there listening to bad karaoke and wondering if you could even bear to have a sheet covering you.

Once we'd adapted to Spanish time, it wasn't quite so bad.  The boys were going to bed at 10:30 and waking up at 9 am, and I'd go for a late walk in the relatively cool air instead of pretending I could sleep.  But Graham is not letting me book a hotel again in a hurry!

The bit where we missed the bus

Cocodrilo Park advertised a free bus on Mondays.  On Monday morning we got to the bus station in plenty of time.  And we waited.  And waited.  Finally we asked, only to be told that the bus went from the back of the bus station, and we'd missed it.

Somehow that threw the whole day off.  We made some attempts to recover and enjoy the day, but even a splash in the hotel pool and a lizard-spotting walk along a coastal path didn't restore our mood.  Sometimes you just have to draw a line and hope the next day is better.  And, to be fair, it was.


And the in between

So we got to Maspalomas on the bus about lunchtime, and we walked through the hot hot streets and across the hot hot sand dunes (admittedly worth seeing, but the Sahara has gone waaay down my list of places to visit).  But then we got to the sea, and walked barefoot through the cool shallow water with a breeze blowing all the way back along the coast, and we weren't too hot at all.  Although it was a nudist beach, so we got some ...interesting views along the way.

The mountainous centre of Gran Canaria is spectacular.  I would definitely recommend going there.  Just not with complaining kids in the back seat, on a 40°C+ afternoon.


We stopped to admire Caldera de los Marteles, a volcanic crater, then made our way up to Roque Nublo.  The walk to the rock from the car park was just over a kilometre, but the heat was seeping out from every rock and tired strand of grass.  The boys and I soon wilted and retreated to the shade, leaving Graham to go on by himself.  Some enterprising soul had set up an ice cream stand next to the car park, so we all had to have our second ice lolly of the day, to recover. 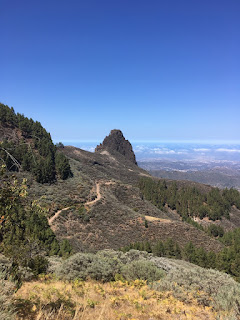 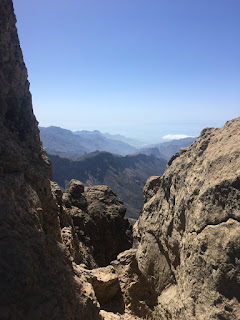 The way back took us down a terrifyingly bendy road which wound its way down the edge of a gorge.  It seemed to disappear as soon as we'd driven it - I kept looking back, trying to trace the route we'd taken, but I never could figure out how someone had put a road there at all.

It wasn't really our kind of hotel, or our kind of town (Puerto Rico is built entirely for tourists).  But it was clean and convenient, and it was great to come back and splash in the pool after a hot day out. 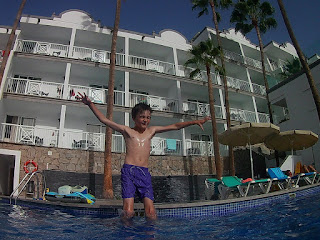 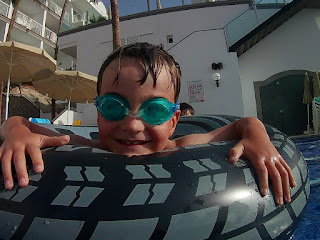 And when the sky does this, almost anywhere looks beautiful. 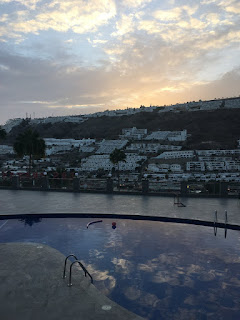