A recent report by the UK Methodist Church, entitled God in Love Unites Us, has generated a lot of debate about same-sex marriage in the church.  There are already dozens of articles putting forward the views from each side.  But in such a divisive issue, I felt like it was important to remember what we do agree on.

These are six things that I've heard from both sides of the debate.  We may doubt that others believe them.  We may disagree drastically on how to live them out.  But if we can at least assume that everyone believes them, then they may just give us a tiny piece of common ground to build on. 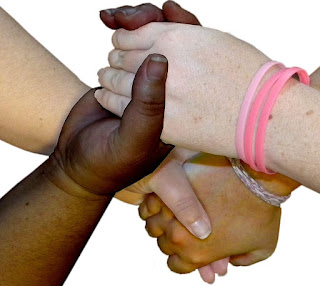 We want to be welcoming and loving

At their best, churches can be places where everyone feels welcome - where lonely people find a family, the unloved find love, and the outsiders find a community to belong to.

At their worst, churches are places where everyone who doesn't live up to our ideals is made to feel excluded, ashamed, and even hated by God.

We would all prefer our church to be more like the former, but we have to admit to ourselves that they often fall short.  The booklet Christian Role Models contains 20 moving and inspiring stories from LGBT Christians around the world; almost all of them experienced rejection from fellow Christians at some point.  Fortunately, many also found encouragement and support in their faith.

And so we realise that making a choice about our marriage theology is just one step in a long walk.  It's possible to refuse to offer same-sex marriage and to be a church where LGBT people feel welcomed, accepted and included.  It's also possible to register a church for gay marriages but to have an atmosphere of distrust and suspicion.

Either way, we realise that LGBT people have felt rejected from our churches, and that our beliefs have been used to push them away from God.  We realise that our actions and words need to address the hurt and assure people that God loves them.

We all agree that our church should make everyone feel welcome.  Let's find common ground to make that a reality.

We value the Bible and try to be guided by it

I recently followed Humanists UK on Facebook, simply because I'd read some comments on the page ridiculing those who used an ancient manuscript to get instructions from some old man in the sky.  I felt like I might sometimes need a reminder that viewing the Bible as important in any way is rather unusual in itself.

It's easy to frame this debate as "I follow the Bible; you don't."  It's easy to think that if other people really valued the Bible, they wouldn't read it like that.  But if you step outside of church culture for a moment, you realise how much importance we all, within it, place on what the Bible says.

God in Love Unites Us says that "a report...identified seven different attitudes to biblical authority" (don't you love the Methodists - what other denomination would even count?).  So it's not surprising that we can read the same words and come away with different convictions.

But let's try to avoid suggesting that we are the only ones who really understand God's word and live by it.  Let's do each other the honour of recognising that we both read and wrestle with the Bible, and that we are still learning from God in the process.  Let's shy away from describing one viewpoint as Biblical, with the implication that the other is not.

Let's find common ground in our value for the Bible - and if you need persuading of that, go and read a few humanist comments on the subject.


We want to pursue God's righteousness

I'm not the sort of person who often cries in a church service.  If I do, it's usually because something else in my life is causing me to be emotional.  This time, it was because a Bible verse landed in my mind with the force of a ton of bricks.  You load people with burdens hard to bear, and you do not lift a finger to help them.

That was Jesus speaking to the experts in Jewish law (Luke 11:46) - the ones who thought they had righteousness all sewn up.  Do this, don't do that, everyone respects you and God's happy too.  Simple.  And Jesus said, no, but the way you go about it heaps burdens on others while you get the easy life.

For me, the easy way isn't caving in to popular culture.  The easy way is to keep the status quo, where the people I know are middle-class Christian families who are basically a lot like me.  And however unwittingly, my easy way has been putting barriers in the way of others, which I personally don't have to face, and which I haven't lifted a finger to move.

The hard way, the God's righteousness way, is to find out what those barriers are, and what I can do to help.  It probably involves lifting lots of fingers.  I'm not even sure I can do it.  But I'm pretty sure that's what pursuing God's righteousness in this matter means for me.

For others, pursuing God's righteousness may mean standing up for their faith in the face of opposition.  It would be easier, they feel, to abandon their conscience and agree to change, but the hard way, the God's righteousness way, is to affirm traditional morals while finding new and radical ways to love and include those who live outside them.

Let's recognise that we may all be moved to tears by our failure to live up to God's righteousness.  And let's find common ground in supporting each other to hear God and follow him.


We care for the church

With all this talk of welcoming and including those who are outside the church, we sometimes forget that there are people inside the church who need caring for too.  It can be disorientating and frightening to have to re-examine beliefs that you have held for years - especially if you feel like you are being forced to change them whether you like it or not.

I vividly recall a time when I felt like I was desperately trying to dig down to the solid rock that I had been told my faith rested on, only to find that it all seemed to have turned to sand.  At such times you find yourself questioning your identity, your community and your entire worldview.  It is not a comfortable experience.

Most changes in our beliefs are considerably less drastic.  They occur gradually over time, as a result of meeting new people and doing new things.

The trouble comes when either a change, or a lack of change, is seen as harmful.  For some, changing to accommodate same-sex marriage in church is dangerous.  It calls into question the authority of the Bible, offends against God's holiness, and may even risk people's salvation.

For others, holding on to a traditional view of homosexual relationships is dangerous.  It has caused people to turn away from God, believing that they cannot be loved by him; it has contributed to marginalisation, violence and suicide; and it has led people to believe that Christians are bigoted and unloving.

Given such high stakes, it is no wonder that we feel like we either have to force others to agree with us, or split apart completely.  But underneath all of those fears of danger is a deep care and concern for Christ and his church.  Let's hold each other's fears as fiercely as we hold our own.  Let's find common ground in our care for the church.

You know that something's become mainstream when Sainsbury's supermarket has a banner outside supporting it.  I'm afraid my reaction was slightly cynical: well, of course they support LGBT rights now, when they know it won't lose them any customers!

All of us within this debate are well aware that it wasn't even a conversation 50 years ago.  The culture has changed, and we have already changed with it.  Even supermarkets are taking a moral position.

But let's not equate one position with "keeping the faith" and one position with "uncritical acceptance of culture".  We both look at the world around us and see the good and the bad, and we incorporate that into our faith and our lives.

It's impossible to separate out our beliefs from our friendships, our experiences, and the culture around us.  All we can do is to try and ask ourselves the right kind of questions.  Do I think this because it's easier for me?  Does this make me more loving, or less?  Does this fit with what I know of Jesus?

Even then, it's easy to have a horrifyingly large blind spot - a log in our eye, as Jesus puts it.  Sometimes we need other people to ask us those questions.  And it takes time to ask them and answer them respectfully, carefully and prayerfully.

So let's not be quick to assume that other people are blindly following a party line.  Let's assume that our blind spots are at least as large as theirs, and let's find common ground as we gently and graciously try to reduce them to a speck.  Let's be aware that we are all affected by our culture.


We trust in Jesus

Ultimately, our faith doesn't depend on our Biblical interpretation skills, our ability to adapt to popular culture, or even our personal morality.  It depends only on our trust in Jesus - and fortunately, he is in heaven interceding for us.  Let's pray for each other and for our church, that we may rely more and more on Jesus and his all-encompassing, death-defying, terrifyingly wonderful love.  Let's find common ground in him.

Thanks, Martha - that is a really good summary of my thoughts on the issue too!

Thank you Martha for your thoughtful consideration of the matter in hand. We discussed this very subject tonight, at length, in our house-group. I am pleased to say that despite there being some strong opinions both for and against the Methodist Church's current standpoint everyone listened to each other with respect for our opposing heartfelt opinions and life-long beliefs. We were all at one in the fact that we did not wish the debate to divide us, but to strengthen us because we felt safe to be open and honest about the way we feel. At last we are all discussing something which has been very close to my heart. I have long felt there has been a 'right' or a 'wrong' answer to the whole Biblical interpretation of relationships, it wasn't open for debate among many Christians. Yet I needed to debate it. Whether we come to a consensus or not isn't really the issue for me. We will probably never achieve that, but at least we are having the discussion.