On the naming of things

May 11, 2018
Maria thought of plants at school - beans in jam jars... and mustard and cress on bits of flannel.  But what I like, she thought, is not all that but the names of things.  And every single kind of thing having a different name.  Holm oak and turkey oak and the sessile and pedunculate oak.  Sessile and pedunculate...
'What?' said Mrs Foster.
'Nothing.'


I have on my bookshelf a faded paperback in a cracked plastic cover.  On the front cover, a girl with windblown hair gazes into the distance; below her, small silhouetted characters in top hats and Victorian dresses parade on a beach; and under them are grey stones with swirly ammonite fossils etched on them in white.  The title, in block capitals, is A STITCH IN TIME by PENELOPE LIVELY.

I had never given much thought to the author until I happened upon a book in the library called Ammonites and Leaping Fish: A Life in Time, also by Penelope Lively.  Despite the references in the title, I was disappointed that she didn't mention "my" book in the text.  I found the first chapter, a musing on old age, rather slow going; but then she moves on to stories of her childhood (in Egypt, in the Second World War) and always having her nose in a book, and being fascinated by historical landscape, and learning the names of birds, and finding fossils in a rock.  And I could see, exactly, how a lady like that would have written a book like A Stitch in Time.

"The naming of things", writes Penelope Lively in A Life in Time.  "I have always needed that, where the physical world is concerned."  It's a strange compulsion, this need to identify and classify the things around us.  I think maybe we all have it to some extent, for some class of objects.

Before Toby was born, I was firmly in the, "It's a red one" class of naming cars.  Now, under his instruction, I have learned that this is a Volvo and that's a Peugeot.   Then he moved on to models - a Skoda Octavia, a Renault Clio - and then even to categories within that, so that he informs me that that's not the current model or the next oldest one, but the one before that.  The hatchback version, of course.

I grew up in a house where books such as The Concise Field Guide to the Animals and Plants of Britain and Europe were regularly consulted.  My dad is firmly in the group of people who need to know the names of what they see, but I dabble around the edges.  This time of year, when the spring flowers come out, I get irritated that I don't know more of them.  Then I get home and forget to look in the flower book, and spend the whole season vaguely thinking, "What's that pink one?  I really must find out what that pink one is called."  I know a few plants, a few birds, a few stars, and not much, it seems, of anything.

What I do share with Penelope Lively is that satisfaction with the language of naming.  Sessile and pedunculate.  Lesser celandine, wood anemone.  Arcturus, Andromeda, Sirius the Dog Star.  Names which are a pleasure to say, that fit well in your mouth.

The names connect us back to the object's history, to the people who named them.  Cassiopeia, that W of stars in the sky, was a queen of Aethiopia.  Passion fruit were named by missionaries who thought they illustrated the crucifixion of Christ.  We spotted a pair of snails on the way to school, and I was trying to remember their proper name - arthropod, monopod?  Definitely something-pod.  Does that mean they lay eggs?  asked Toby.  No, I knew that pod was connected to foot, as in podiatry.  Turns out they are gastropods, from the Greek from "stomach" and "foot" - apparently a reference to their unusual anatomy. 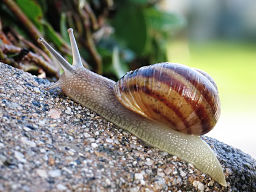 So names help us to identify things, but the names that we know also identify us.  They root us in a time and place.  We name the things that we see every day; and if we are suddenly set down in a place where we don't know the name of anything, we feel lost.  A whole cloud of knowledge is suddenly useless, and we have to build a new web of connections to our environment.

Maybe it's not such a strange compulsion after all, this naming of things.

Snail image: By macrophile on Flickr [CC BY 2.0 (https://creativecommons.org/licenses/by/2.0)], via Wikimedia Commons