December 01, 2015
It's been one of those months where we've felt a bit battered.  As well as the violence in Paris, we've had news of several friends suffering from severe injury or illness, which has torn at our hearts.  Moreover, the weather has blown us around, soaked us, hit us with hail, and even tried to snow on us slightly.  Despite all that, some chinks of sunlight have found their way through, both metaphorically and literally.  When you live with two small boys, there are always going to be some giggles. 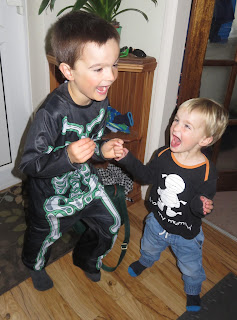 - was very excited about going to see fireworks for Bonfire Night.  He was the one jumping up and down and cheering. 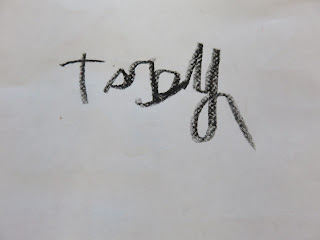 - announced that he "loves green beans" when I went to have a school lunch with him.  Something I had not previously suspected.

Quotes:
When my Dad was getting all intellectual in his sermon and talking about the relationship between the knower and the thing known, Toby whispered to me, "There's a Noah in my class!"

He asked what was for dinner.  I told him, and he responded, "Yuck. (pause)  I don't know what that is, so I'll just say Yuck anyway."  You see why I was surprised about the green beans.

- wants to help with vacuuming but is just a little scared of the noise.

- has mastered going up and down the stairs in a standing position, without holding anyone's hand.

- will make quite a good attempt at echoing our words, but still thinks that "da doo da cah bah!" counts as conversation.

- went from merely waking up several times during the night to not wanting to go to bed, not wanting to have a nap, and basically not wanting anything to do with sleep whatsoever.  Fortunately he seems to have settled down again now.

- a nice "date" with Graham (and Theo in tow) at Park Bike Works in Derby.  We were there before the lunch rush, so it was a lovely relaxed atmosphere, and we were very impressed by the food.


- getting to go to my first blog conference.

- no need for fillings, despite the visit to the dentist being my first in... um... far too long...

Recipe of the Month: Carrot Cornbread 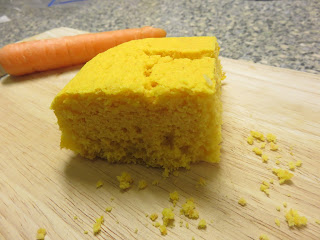 This is the time of year for soups, chillis and stews, and this goes very well with any of those.  My boys love cornbread because of its slight sweetness - even without any added sugar - so this recipe gives you the secret satisfaction that comes from sneaking vegetables into something they will eat without any fuss.  Albeit a lot of crumbs.  Of course you can grate the carrots and mix everything up in a bowl, but a food processor is quicker and completely blends the carrots with everything else.

Preheat the oven to 180°C.  Grease and line a 20-24cm (8-9") square baking tin.
Peel the carrots and chop into large chunks.  Put in the food processor and whizz until finely chopped.  Add the remaining ingredients and process again until mixed, scraping the sides down if you need to.
Pour into the tin and bake for 30-35 minutes until risen and firm.  Cool slightly before cutting into squares.