November 20, 2015
This is one of those scrappy puddings that I conjured up out of a bit of leftover pastry and whatever I could find to throw into it.  Traditional treacle tart is composed of golden syrup and breadcrumbs, which is precisely as sickly sweet as it sounds.  When I spotted a recipe which included grated apple, it sounded as if it might cut the sweetness quite nicely.  So I gave it a try. 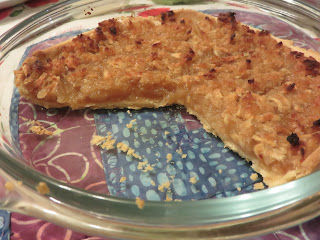 pastry made with 2 oz butter and 4 oz flour
1 large slice of bread, made into breadcrumbs
1 eating apple, peeled, cored and grated
juice of 1 lemon
3 tablespoons of golden syrup

Roll out the pastry and use to line a flan dish or other shallow dish (I used a lid from one of my Pyrex casserole dishes).  Mix together the breadcrumbs, apple, lemon juice and golden syrup.  I had a whole lemon that needed using, but that did make it quite lemony; try half a lemon if you prefer.  Taste and see if you like the sweetness, and add a bit more syrup or lemon juice if it needs it.  Spread the crumb mixture in the pastry case and bake at 200C for about 20 minutes, until the pastry is golden and the crumbs look a little crunchy on top, but still nice and moist underneath.  Serve warm with ice cream or custard.

Unknown said…
I Agree that treacle tart is toothachingly sweet. Yum! But this sounds good.
21 November 2015 at 00:09

Martha said…
Treacle tart is a bit of a funny recipe anyway. And a funny name, but I guess it sounds better than breadcrumb pie!
23 November 2015 at 13:59

December 12, 2011
You will probably remember me blogging about Granbury and Dinosaur Valley State Park before - it's a favourite place of ours to take family when they come to visit, or just to hang out ourselves.  Normally we would just do a day trip down there, but this time we decided to make it a weekend. Maddy, Graham and Toby in Granbury Granbury town square was all dressed up for Christmas, with cowboy-hatted Christmas trees and wreaths in every window.  Anthony and Maddy picked up some Texas souvenirs in the stores and we ate lunch in our favourite 50's-themed diner, Rinky-Tinks, with a bit of Elvis on the juke box. In Rinky-Tinks Venturing outside the square for a change, we strolled along a pleasant street and found a park.  Standing in a playground for the afternoon would not previously have been high on our list of weekend-away activities, but having a one-year-old kinda changes your perspective on these things.  Toby discovered slides for the first time and went righ
2 comments
Read more