October 26, 2015
Finally!  It feels as if we've been saying that Toby's "nearly five" for the whole year that he was four.  But now he is well and truly five years old.  To celebrate, he requested a jungle animal themed party.  We decided to risk inviting seven children to our house - which seems relatively unusual.  Most of the parties Toby has been to have been at the village hall or a soft play area.  Admittedly this way did involve a little more planning, preparation, and moving of breakable items upstairs, but we enjoyed it.  Oh, and the kids did, too. 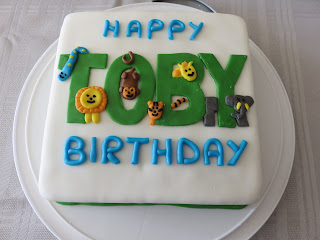 So, the games.  Some party games are non-negotiable; so I spent half an hour entombing a present in many layers of jungle animal wrapping paper, and Graham spent fifteen minutes sweating over the music player, trying to make sure that every child got a turn to unwrap it.

Apart from that, we had: 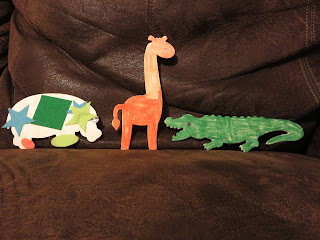 - Crocodile Swamp - jump on a piece of wood when the music stops, to escape the hungry crocodile;

- Guess the Animal - each child had the name of an animal on their back, and had to ask questions to find out who they were;

- dancing to Gangnam Style, the Superman Song, and Music Man (I think the adults may have enjoyed themselves more than the kids);

- and the pièce de resistance: giant bubble wrap!  SO LOUD! but they loved it.  Eight children jumping on bubble wrap sounds like fireworks exploding indoors, but if you cover your ears for a moment, it doesn't last long.

We didn't have enough table space for so many children, but they didn't bat an eyelid at having to picnic on a plastic tablecloth.  The pizza, mini sausages and grapes vanished quickly and without major incident.  And then it was time for... the cake! 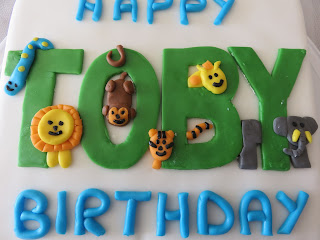 I'd originally thought of a jungle scene for the cake, but getting a miscellaneous collection of animals into artistic positions is actually quite difficult, even in icing.  Especially when you discover you can't actually draw a monkey.  Then I spotted a design with tiny animals peeking out from behind the letters.  Perfect for a short name like TOBY! 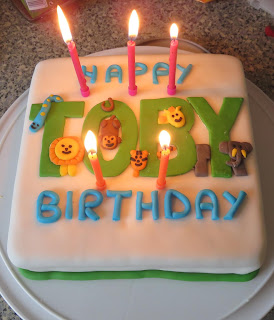 Of course I forgot about candles until the last moment.  I hurriedly dug out four.  Four?  Oh no, we need five now, don't we?  Five candles were lit and ceremonially extinguished.  And Toby was well and truly five years old. 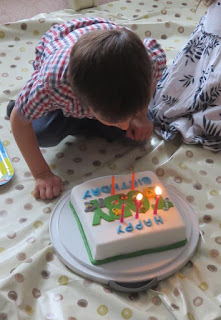