January 10, 2014
Some months ago I asked for blog post suggestions, and my friend Claire wondered if I'd write about recipes for toddlers.  It's been in the back of my mind since then, and I thought I'd better get on with it before her little boy ceases to be a toddler!  These are not so much recipes as suggestions, though, since once we got past the pureed veg stage, Toby pretty much ate some version of what we ate.


So, the most important thing: GET AN ICE CUBE TRAY!  Or rather, several.  With ice cube trays, ziplock bags and a microwave, you can produce entire toddler meals in thirty seconds flat, and this will probably save your life.  Believe me, there is hardly anything you can't freeze in an ice cube tray.  Start with the aforementioned pureed veg, then move on to pureed meals, then pretty much anything that doesn't have large chunks in.  Bolognaise (spaghetti) sauce, lentil curry, chicken casserole, mild chilli con carne, vegetable tagine...

Of course, you need starch too.  Mashed potato is the obvious one, and always a winner.  Rice and small pasta shapes work as well; just pack them into the cubes and pour water over to cover.  The only snag is you have to defrost them separately and drain the water off before you add them to the main course.

Once frozen, pop the little blocks out, bag them up neatly, put them back in the freezer, and smile a smug super-mummy smile.  Then, when the howling starts, calmly pick out a couple cubes of beef stew, a couple more of mash, nuke for a few seconds, stir well, and watch your lovingly-prepared instant meal get spread all over the highchair.  Or, as may occasionally be the case, mostly reach the mouth.

The variation on this, when they're a bit older, is freezing chunks on a foil-lined tray.  I mostly did cooked veg - carrots, sweet potato and so on - but it would probably work for diced cooked meat, too.  Bag up and defrost as before.

And finally, if there's one recommendation I have to make for toddler food, it's this: canned refried beans.  Don't be put off; they do look and smell alarmingly like cat food.  And it may not be something you'd usually buy.  But get a can and a packet of tortillas.  Spread a few spoonfuls of beans on one tortilla, top with grated cheese, and another tortilla, and dry-fry or put in a panini press (I loooove my panini press!) until the cheese melts.  Cut into manageable pieces and present to toddler.  An Indian friend of mine recently came for lunch with her one-year-old, who apparently is generally very suspicious of anything that's not rice and curry.  You would not believe how quickly he hoovered up one of these! 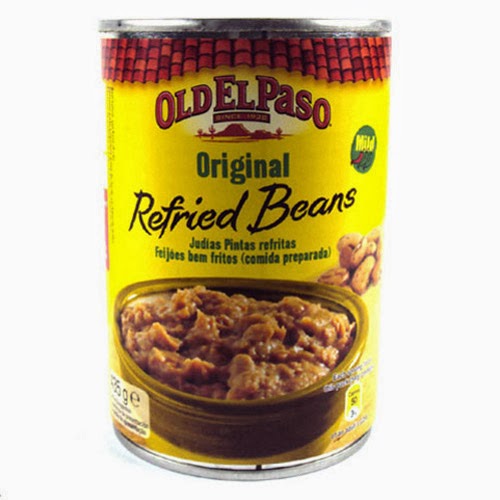 If you need something a bit more portable, I used to spread the cold beans on a bit of bread or tortilla as a sandwich for Toby, and that always went down well too.  And guess what?  Yes, you can freeze the rest of the can in an ice cube tray!