October 20, 2013
We've moved house!  Just in case you were wondering why I hadn't blogged for over a month.  I can assure you that nothing hugely exciting has happened in the intervening period; we have mostly been putting things into boxes and taking them out again, and wandering vaguely round the new house trying to work out where to put it all.  The new place is substantially bigger than the rented house we were squashed into for 9 months, though, so we are appreciating the space.  Now it's at least halfway towards being a home, and a certain small person has a big birthday tomorrow (do you realise how many toys are marked "Unsuitable for children under 36 months"?  It's like the legal drinking age for toddlers!) we had to... make a cake and throw a party!

When we asked Toby what he wanted for his birthday, his one stipulation was "a birthday chocolate cake".  Further enquiry confirmed that it had to have Smarties on it.  When your mum used to be a professional cake decorator, I'm afraid it gets a little more elaborate than that. 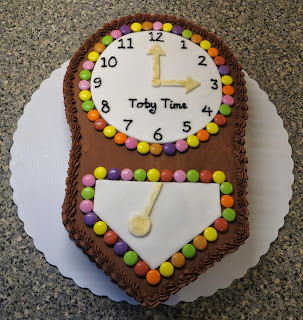 I based it on this Hickory Dickory Dock cake from a book called 50 Children's Party Cakes, because Toby is always asking what the time is. 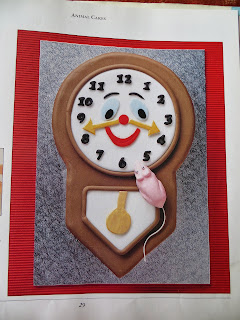 The design is pretty simple, just a round cake and a square cake.  Cut the two bottom corners off of the square (mmm, offcuts!) and a semi-circle from the top so that it fits snugly onto the round cake.  I substituted chocolate buttercream for the brown fondant, because it just tastes better, and surrounded the clock face and pendulum window with plenty of Smarties.  And of course, it had to say 3 o'clock.


We made the party a combined housewarming and birthday party, and used it as an excuse to get to know our new neighbours a little better, as well as (mostly) Derby friends and some family.  It turned into a surprisingly large number of people considering we haven't even been here a year yet!  We were really overwhelmed by how many friends came, and brought such generous presents.  Toby very quickly learned that the doorbell ringing meant something else to unwrap, and went running to greet each new arrival!  He's old enough now to get excited about the whole thing, and had a great time.  He loved having lots of people around; enthusiastically sang Happy Birthday to himself along with everyone else; blew out the candles very professionally; and was finally rewarded with a piece of birthday chocolate cake.

P.S. The sharp-eyed among you will have noticed the complimentary bump photo in the above selection.  For those that don't know, we are expecting a little brother for Toby in February!