September 22, 2011
Cooler temperatures have arrived, and every living thing in Texas has breathed a sigh of relief.  There's even been some rain!  I lost a few plants to the Great Heat of 2011, but those that have survived are perking up and even daring to put out some flowers.  Also, a couple of weeks ago I attended a Yard Smart seminar run by the city of Fort Worth, which left me all excited about gardening again.  If you live in Fort Worth and are at all interested in plants, go: the speakers were engaging, entertaining and inspiring, and it's entirely free!

One of the topics at the seminar was fall greens.  My last attempt at greens was spring lettuces, which put out about six leaves before deciding that it was far too hot to bother growing.  The advantage of planting in the autumn is (hopefully) a longer period between baking and freezing temperatures, and also, apparently, the shorter days encourage the plants to store sugar, thus making the leaves sweeter to eat.  I sowed kale and collards, those archetypal southern greens, and they sprang up in less than a week.  Definitely an encouraging start. 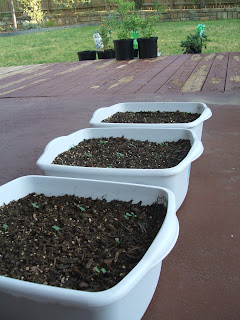 The only thing is, owing to Toby trying to "help", I got the boxes mixed up and have no idea which is kale and which is collards any more.

Of the plants that I acquired in the spring, I think the turk's cap has done the best.  Even in the scorching days of August it managed one or two little red flowers, and now that September has come it is blooming in abundance.  The sage and daisies ceased all activity and went into hibernation mode over the summer, but are stretching out a petal here and there now.  The silver foliage of the wormwood stayed stalwart.  The coreopsis were the major casualties; not entirely dead, they nevertheless look decidedly unhappy.  Even before it got really hot they came down with some kind of fungus, and I learnt at the seminar that they are not keen on clay soil.  You could probably make pots out of our soil, so I don't wonder they're struggling.

A new plant nursery opened up close to us fairly recently.  Wishing to support local business, Toby and I went for a browse sometime back in July.  Unfortunately they'd covered the ground in a thick layer of pebbles.  I put Toby in his pushchair, ploughed in and stopped dead.  Four-inch wheels in two inches of loose gravel is a distinct no-go.  I had to carry him, and believe me, lugging around an 18-pound baby in 100-degree heat is a sweaty endeavour.  However, we emerged from the ordeal with two lantana plants - small shrubs with leaves a bit like mint and pretty clusters of small flowers.  Of course they stopped flowering the minute I got them home, and one was doing so badly in its pot that I had to bung it in the ground with much haste and little preparation.  It was touch-and-go for a while but it's beginning to lose its crumpled look.  I hope it survives; it's the New Gold variety with bright yellow flowers, and others I've seen look really nice.

The other is the regular pink-and-yellow, and never came quite so close to death's door.  I actually saw it in Virginia, where it was labelled "ham & eggs" due to its unusual colour scheme.  While "lantana" sounds rather more sophisticated, you have to admit there's a certain satisfaction in having a plant named after a breakfast food.  Do you think I could find "toast & marmalade" or a porridge plant, too? 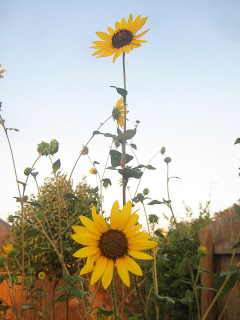 And finally, I should just mention the sunflowers, which have been rioting along the back fence.  Living up to their name, they seemed to revel in the heat, and provided a cheerful and entirely unexpected backdrop to our garden all summer long. 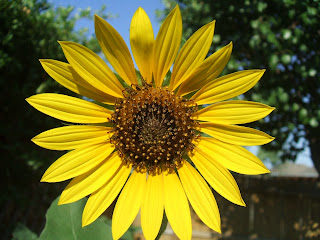