April 01, 2011
When I was a child we drove up to visit my dad's family near Sheffield about once a year, and there was always a slight thrill when we swung on to the M1 and saw those big blue signs telling us we were heading to THE NORTH. Somehow those two words managed to convey an image of massive icebergs sailing under the glow of the aurora, while reindeer roamed in the conifer woods and polar bears fought by the light of the midnight sun. And then we got to Sheffield.

And then I grew up and gradually realised that Sheffield is barely halfway up England, and there's a lot further to go before you reach the snowy wastes. On the way you pass through Yorkshire, which to be honest can do pretty well at being a snowy waste itself in winter, but we arrived in spring, to the much more inviting drifts of daffodils and crocuses. 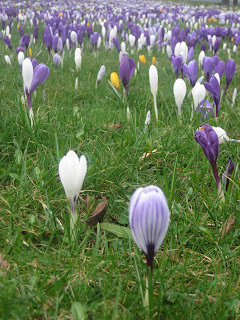 Graham's parents, as I may have mentioned, live in Todmorden. Pretty much all the towns in the area are in valleys, which makes it easy to get a birdseye view. If you walk at right angles to any of the main roads you are very soon on a more-or-less vertical trail. Anthony and Maddy live in the clump of red-roofed houses near the bottom of this photo. 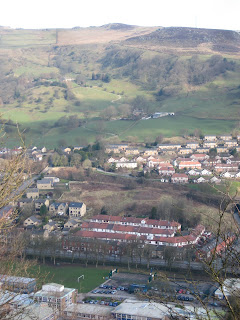 Up on "the tops" it is mostly farmland. The area got rich on wool, and there are still sheep around. This one looked like it was used to posing for photographs, obligingly showing off its best profile on top of a small mound. 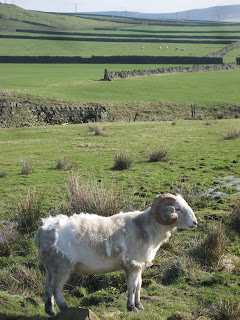 Another view from the top down. We actually climbed up that slope that you are looking down(not with Toby!) On our previous visit we'd come down that way, so we knew there was a path somewhere, but failed to find it this time. We just clawed our way up through streams and rocks and tussocks of grass till we got to the top. 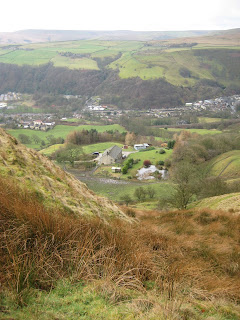 Once there, we were on a perfectly respectable path, watched over by a solemn guy with a big nose. 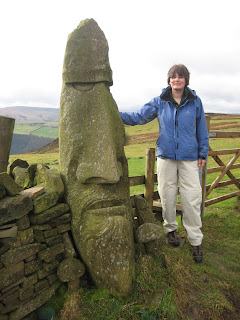 Back down in the valley, this is Graham admiring the crocuses in the local park. I just love how 10 minutes' walk gets you from civilisation to almost-deserted hills and back to the ice-cream shop again. 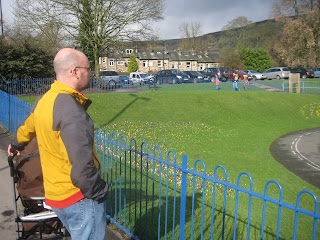 We visited Graham's sister in Huddersfield a few times, and on one of those occasions took the opportunity to leave Toby with his doting relatives again and take a quick walk by ourselves. This is the view from near Holywell Green, looking over Halifax. 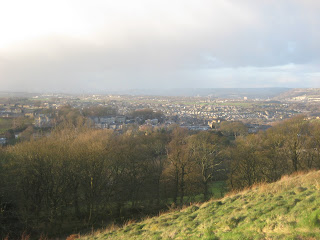 Such a typical English scene that we had to take a photo! You could barely squeeze into the phone box past the hedge at the left, but it looked like it still worked. They take credit cards these days, presumably so nobody has to go round collecting all the 10p pieces from them. Imagine. What a job. 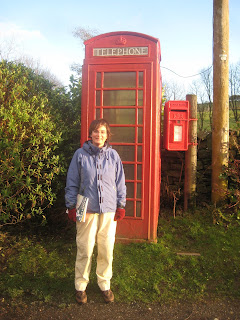 At the end of the walk we were rewarded by one of the best rainbows we'd ever seen. We stood there drinking it in and snapping photos, and then ran back to the car just before the rain arrived. 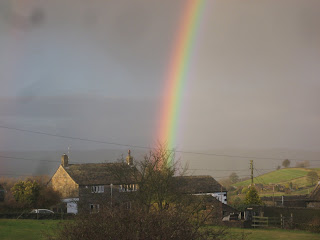 Graham's friend Rich braved the M6 on his motorbike to join us one weekend. We went on a hike to Stoodley Pike. On previous visits I'd had this landmark pointed out to me (it's clearly visible from most of Todmorden) and had always assumed it was spelt Studley Pike, as to my southern ears the northern u sounds exactly the same as oo. On consulting Wikipedia I also learned that Stoodley Pike is in fact the hill, and the pointed beacon on top is properly known as Stoodley Pike Monument. Having been disabused of everything I thought I knew about the place, we went to visit it. 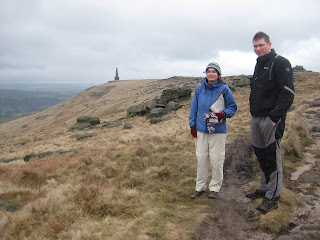 The final approach. Inside is a short spiral staircase with no lighting except what filters in from top and bottom. I was warned that sheep sometimes liked to shelter inside and then bolt past you in the pitch darkness, so I approached with some trepidation. Fortunately we didn't meet any homicidal ovines on this visit. 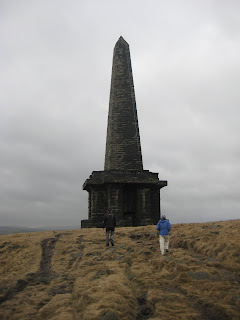 Graham and me on the balcony of the monument, and the view from the hill. As you can see, it wasn't a particularly warm day. Anthony and Maddy had thoughtfully provided us with a Thermos of hot water, which attracted envious looks from other chilly hikers. They also gave us some sachets of "3-in-1" coffee, with milk and sugar already included. It reminded me irresistably of the machine in Hitchhikers Guide to the Galaxy which produces a liquid "almost, but not quite, entirely unlike tea" (or in this case coffee). 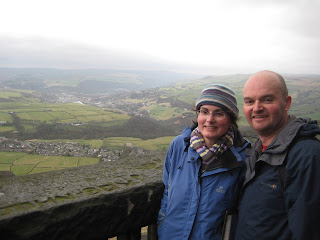 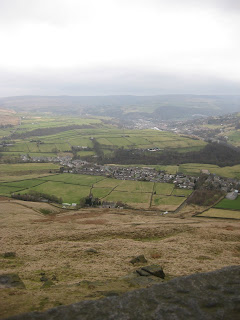 Shibden Hall, near Halifax. The grounds are now a park which we enjoyed strolling around. The hall's most famous owner was Anne Lister, in the early 19th century. She was a colourful character by all accounts, a lady landowner and lesbian in days when both were frowned upon, and keeper of an extensive diary. One final day out, to St Annes, just south of Blackpool. Technically the seaside, but we could just glimpse a ripple of water across miles of beach. The pier was high and dry and it seemed impossible that the sea would ever get close enough to touch it, never mind float boats anywhere near it. Sand and strollers don't mix, so we mostly stayed on the promenade, but you can't go to the seaside without getting just a little sand in your shoes! 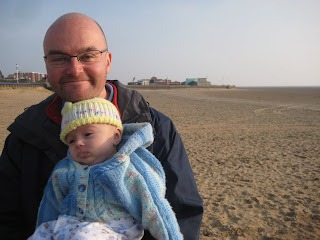