September 08, 2010
So much for catching up, huh? Life has been pretty hectic for the last few weeks, though I'm pleased to report that after endless rounds of faxing, phoning and emailing the mortgage arrangements are finally coming together and we're looking forward to moving into our new house soon! Of course that entails packing, unpacking, cleaning and arranging, but we're hoping that life will be back to normal sometime in October... just in time for it to change forever in November.

With all that, I'm sure my future self will want to remember that, once upon a time, she did have peaceful weekends away with her husband, with hardly a care in the world. Weekends such as this one back in July, when we ventured north into Oklahoma. 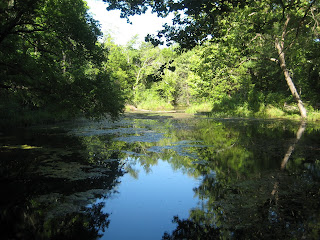 The Oklahoma border is just an hour or so north of Fort Worth, but until recently we were under the impression that there wasn't much point in crossing it unless you wanted to go gambling (more on that later). Then a friend recommended the Turner Falls area. It appeared that maybe there was something worth seeing in Oklahoma after all. We decided to investigate. 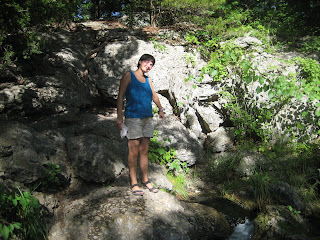 Look, the water comes right out of the ground!
Chickasaw National Recreational Area has drawn visitors for probably thousands of years, due to its collection of natural springs which bubble out of the earth at a cool 68F. When the air temperature is 105F, it's impossible to overstate the bliss obtained by sinking into a cold, clear stream. Sitting there with the green trees overhanging and the curious little fishes darting around and the water gurgling was near enough the perfect way to spend a hot Saturday afternoon. 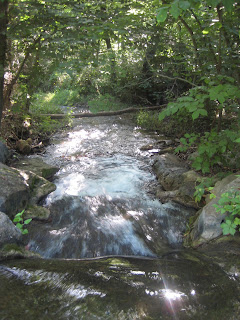 Right outside the gates of the park is a crazy little guesthouse known as the Sulphur Springs Inn. We disturbed a sleepy dog from the doorstep and stepped into a paradise of knickknacks and artifacts - an ancient telephone, a full-size wooden Indian, a piano and a double bass, and much much more. It was tempting to sink down onto one of the couches and spend our entire weekend looking at everything and relaxing to the soothing strains of 1940s music (issuing, we first thought, from an actual 1940s radio, but actually streamed from a much more modern internet radio site). 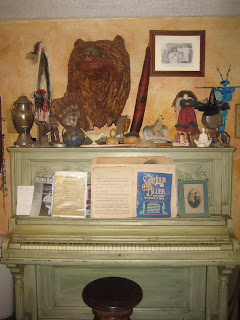 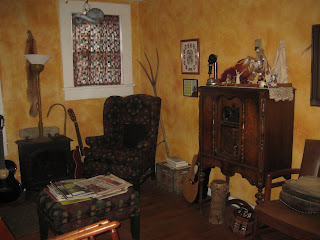 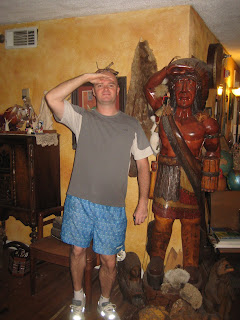 Instead we followed our grey-bearded host, Charlie, up to our room, which had just as much character as the downstairs, and then investigated the outside. This consisted of a ramshackle kind of porch cluttered with chairs, bicycles, and dozing cats. There must have been 15 of them strewn over every available surface, and so fast asleep were they in the heat that the first impression was that there'd been some sort of feline massacre. Once the evening arrived they all came to life again, and I made friends with a little ginger kitten (you knew I had to!). 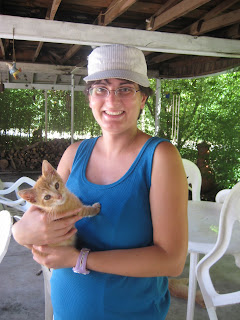 We refused an invitation from Charlie to join him and his wife and friends at a restaurant that evening in favour of spending as much time as possible in cold water, though we were quite touched to be asked. We appeared to be the only guests that whole weekend, and hoped we hadn't wrecked their plans by turning up at the last moment.

Next morning we enjoyed a delicious breakfast of eggs, potatoes and sausage, and then took a country drive along deserted roads to reach Turner Falls Park, crossing a very red river along the way. 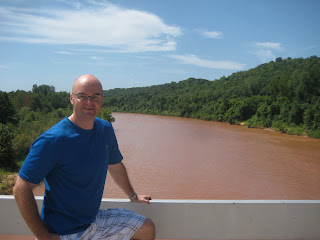 After our peaceful surroundings so far, it was a bit of a shock to join a queue to pay $23 to get into a very busy park, and we very nearly turned around and left again. However, despite the crowds, it was an interesting place. We admired the falls from an overlook and explored a cave, splashed in the swimming pool and ate lunch by the stream. A group of people were being baptised to the strains of a capella gospel music; the idea of paying to get into a place to be baptised struck me as a bit odd, but there's no denying it was a beautiful setting. 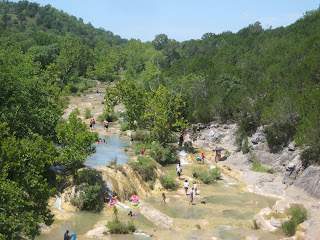 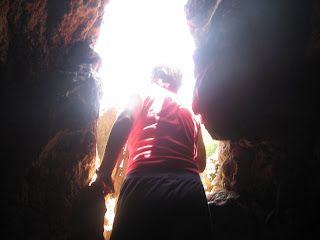 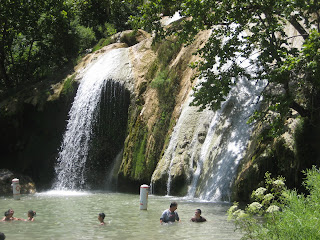 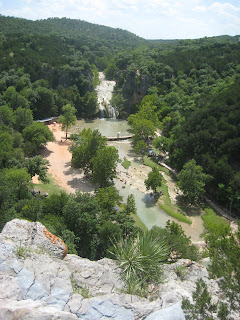 And finally, the gambling. Casinos, you see, are legal in Oklahoma but not in Texas. The Native Americans of the Chickasaw Nation saw a business opportunity in this and built the biggest casino you ever saw right next to the border, and Texans travel up to this for their weekend's entertainment. We had no desire whatsoever to pour our hard-earned cash down the drain, but a place like that you at least have to stop and see. It's built to resemble famous landmarks from around the world, and inside is divided into zones for different cities. It wasn't quite what I expected; I had visualised something like Oceans 11 with lots of card tables and roulette wheels and croupiers wearing black suits. In fact it was row upon row upon row of slot machines with bored-looking people slouched in front of them. The dinging and beeping and chirping made an enormous din, and altogether it looked like about the least exciting way of spending money you could possibly devise. The decor, on the other hand, was impressive, so we wandered around admiring the furnishings, helped ourselves to a free soft drink or two, and headed back to casino-free Texas. 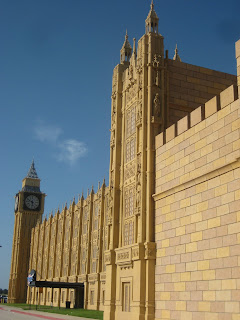 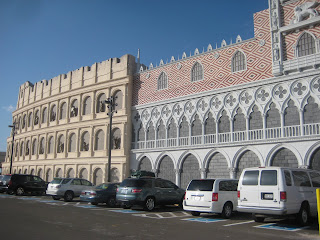 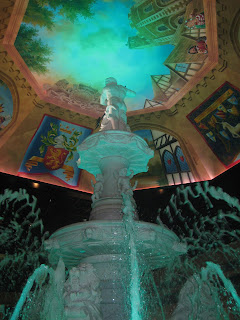 A sample of the interior decoration