Graham and the Giant Watermelon 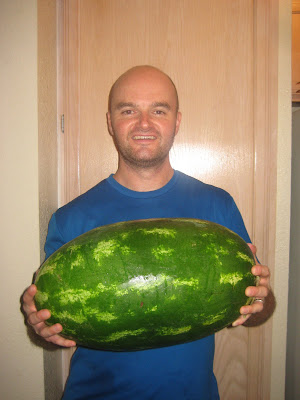 These mammoth melons were on sale for just $2.99, so we had to get one even if it takes a month to work our way through it. We put it on the bathroom scale when we got home. It weighs 23 lb. The alarming thing is that the average pregnant woman gains 30 lb, i.e. somewhat more than the weight of that watermelon. And I sure wouldn't be happy if you told me I had to lug that around everywhere for several months! Hmmm.... 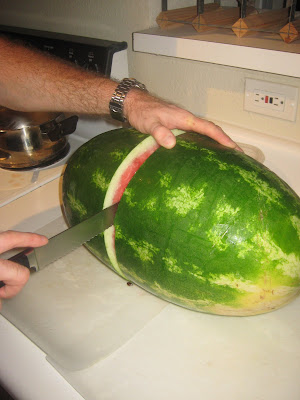 While we're on food news, I've been having a happy cooking day today. Several cayenne peppers ripened all at once so I made a giant pot of chili. 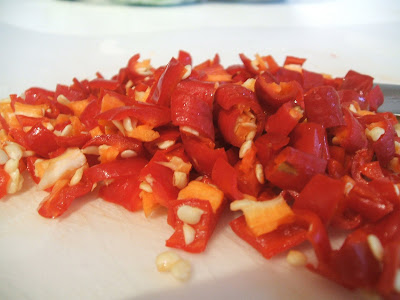 Find yourself a decent size frying pan and a good big stewpot. Put a bit of oil in the frying pan and saute the onions until soft. Tip into the big pot. Then saute both the peppers for a couple of minutes. Lob them in with the onion. Cook the beef until browned, and chuck that in the pot as well, draining off the fat as best you can. Now you're done with the frying pan. Everything else goes in the big pot. Stir it up well, bring to a boil and simmer for an hour or as long as you feel like. When you can no longer resist the wonderful aroma, boil some rice and dig in! 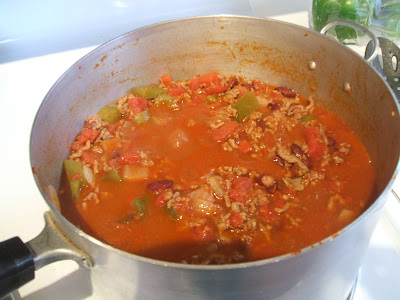 My herbs were looking a bit scraggly, too, so I gave some of them a haircut. Oregano and rosemary are now drying off in the laundry room, and I have plans for mint simple syrup.

See, it really is simple! Put these 3 ingredients into a pan and bring to a boil, stirring until the sugar dissolves. Boil 2 minutes without stirring. Leave to cool a bit then strain through a sieve, pressing the mint leaves to get the syrup out. Decant into a suitable jar or bottle and keep in the fridge for up to a month. Add to lemonade, soda water, iced tea, mojitos...


As if that wasn't enough, flapjack and a rosemary cake have also made their appearance. But you can have the recipes for those another day. Right now I have some eating to do (may as well get on and gain that 30 lb...!)