April 28, 2010
That pretty much sums up our recent trip to the East Coast. My parents were over for a visit so we flew to Richmond for a week to join them and other members of the family, and admire my brother and sister-in-law's newly acquired house. We arrived to stay a whole three days after they had moved in, which has got to be some kind of hospitality record. Major props to them for making us feel very welcome despite trying to repaint, unpack, do general DIY and deal with their cat having kittens all at the same time!

Virginia is beautiful in the spring, with flowering bushes and trees every way you look. Those cherry trees with their big puffy bunches of pink blossom are my all-time favourites and there were whole streets full of them. We paid a visit to the Lewis Ginter Botanic Garden for extra flower admiration. 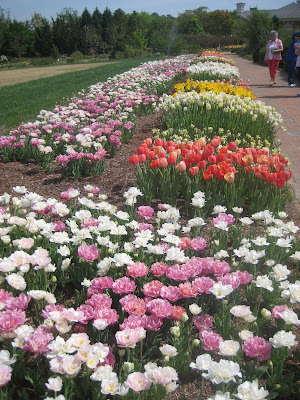 Tulips at the botanic garden

The problem with America's size is that a few hundred miles suddenly falls into the category of "just around the corner". We have friends in Maryland, the next state up from Virginia, and North Carolina, the next state down. Knowing we were unlikely to be any closer to them in the near future, we made plans to visit both. It was well worth it, but I tell you, driving 400 miles to get from one to the other is not just around the corner. Especially when your rental car starts making funny noises halfway through the trip but the car company tells you you can't get another one till Monday so you just have to press on regardless. (It survived the journey.) 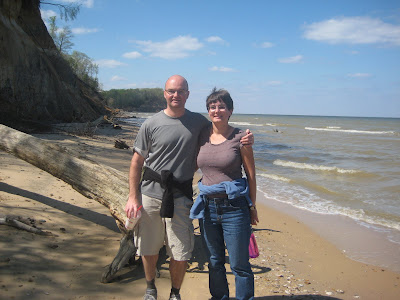 Graham and me and the Chesapeake Bay

As I said, it was worth it. The couple in Maryland have a house on a little airfield and get small planes landing just outside their front door - how cool is that? They are also close to the Chesapeake Bay, so we got our first taste of the seaside. We walked through some wetlands in a state park, spying turtles and lizards along the way, to a small beach on the bay. Apparently fossilised sharks teeth can be found there, but despite my best efforts I didn't see one. It probably didn't help that I didn't really know what I was looking for. 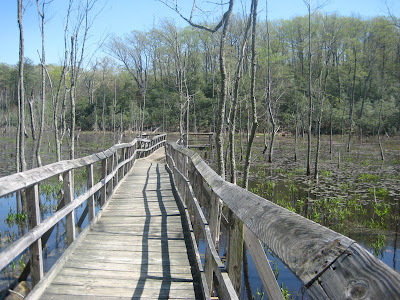 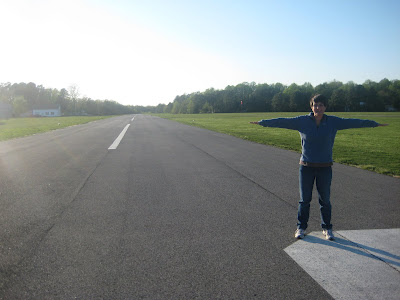 Coming in to land!

Our North Carolina friends, like us, are Brits enjoying the sunnier life abroad. Unlike us, they managed to include an apartment overlooking a marina and the Atlantic Ocean beyond, a big beach just down the road, and a rather pretty seaside town nearby. The weather was absolutely perfect so we enjoyed all of these to the full; walking along the beach, paddling around the marina in kayaks, and strolling the streets of the seaside town. We were also entertained by their 2-month-old daughter, who can make your day with a single smile (and I got several!) 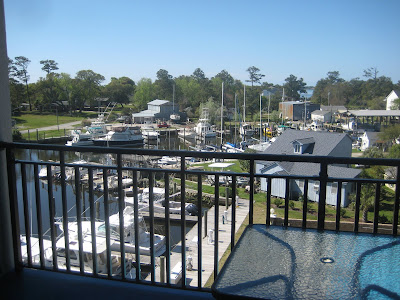 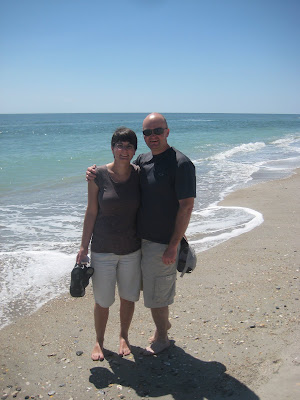 Graham and me and the Atlantic Ocean
Family, friends, sun, sand and sea - what more do you need? 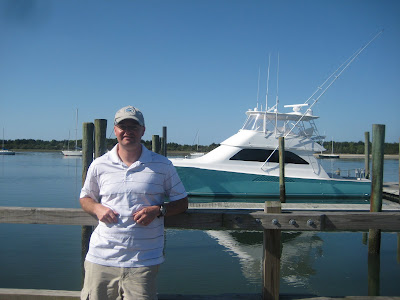 Graham and his new yacht (in his dreams!)

Kristal Dawn Evens said…
And major props to you for putting up with the hammering, drilling, sweeping, and boxes! We loved having y'all stay - you're welcome any time!
29 April 2010 at 07:27