May 25, 2009
The green flag went down and the low grumble of the 900 hp engines swelled to a roar as the trucks rounded the corner into the straightaway. The race was on! A dozen mean machines bounded over bumps, skidded around the corners and bashed each other's bumpers as they hurtled around the dirt track. Up in the stands, we jumped up and down as we cheered on our chosen drivers to the finish line. The once-shiny trucks got muddier and muddier, the track got more and more littered with broken-off pieces, and the competition got more and more intense until finally the chequered flag waved and the winner went into his victory spin.

We'd been downtown on a Thursday evening when Graham noticed some powerful trucks standing by the kerb, and went over to have a look. One of the drivers answered some of his questions and then produced a voucher for four free tickets to the Traxxas TORC race at the Texas Motor Speedway that weekend. 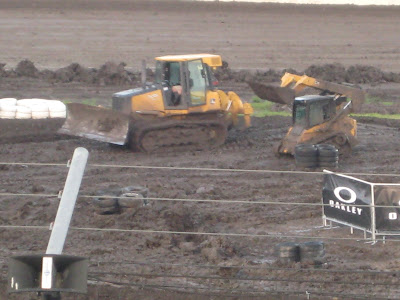 So it was that I found myself doing something completely new - sitting on a plastic seat watching five bulldozers move mud around on a Saturday night. It had rained all day and they were frantically trying to get the track in shape again for the evening's race. The time for the practice race passed, then the time for the first race. The sun went down. We'd seen the sponsor's ads about 10 times each, and could sing the jingle backwards. Finally it looked like something might be happening.

We stood, somewhat bemusedly, through a prayer thanking the Lord for the joys of dirt-track racing, and through the obligatory rendition of the National Anthem. Then came the brrrrrrmmmm that really got everyone's hearts going!

Picking a truck definitely made the races more exciting. I managed to get a winner for the first one - the driver's first win, too, so I'm sure he was a lot more excited than I was! Graham somehow managed to find the crazy ones, including a truck that executed a spectacular flip right in front of the grandstand and had to be towed out of the race.

A brief three races later and it was all over. The winners received their laurels from Miss USA 1999 and the fans poured out of the stadium - with a couple of new ones among them. BRRRRMMMM!