March 23, 2009
Despite the title of the blog and the tantalising picture of caramel slice at the top of the page, some of you may be feeling that my entries have been sadly lacking in food content. Rest assured that I haven't given up cooking in the least, and would like to prove it by offering some photographic evidence of the latest creations.

So, first up: the other day at work one of my colleagues grabbed a left-over piece of bread dough, rolled it out thin, slapped some pepperoni and cheese on it and rolled it up to form what she described as a stromboli - basically a rolled-up pizza. I'd never even heard of this delicacy before, but after one slice, hot out of the oven, I had to make it for myself. The ingredients are up to your imagination and whatever you happen to have in the fridge, so mine consisted of a smear of tomato paste, a few blobs of ricotta left over from a spinach-and-ricotta-lasagna experiment, some grated cheddar and parmesan, chopped slices of sandwich ham and some fresh oregano from the herb box. If I did it again I think I might give it half an hour to prove before putting it in the oven, but even without that it came out very tasty. And it was even better cold the next day for lunch! 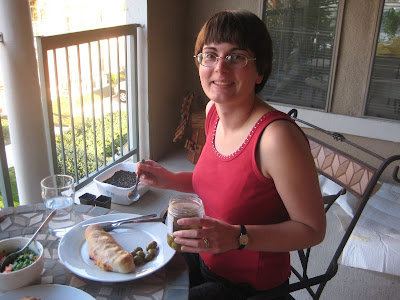 The second was more of a joint effort, thus showing that baking is an ideal bonding opportunity between husband and wife, or some such thing... anyway, it was fun. It was cheaper to buy a bag of six lemons at the supermarket than three single ones, so that's what I did, and hence ended up on the look-out for lemon recipes. On Friday at work I was making lemon meringue pies (bake off pre-made frozen pie shell; mix water with lemon filling mix, add; mix water with meringue mix, add; bake until brown) and halfway through dinner suddenly realised that the actual thing could be a possible repository for some of my excess lemons. Graham said, "Let's do it now!" so we jumped into the kitchen and got going.

In this land of the baking mix and the ready-made, actually cooking something from the raw ingredients requires an extra adjective, and so the activity we were about to undertake is referred to as "scratch baking" - usually accompanied by a look of incredulity: "you made this from scratch?" Yes, and if you looked more closely at some of the supermarket products, you would too. I was serving a gentleman the other day who asked what the ingredients were in a particular cheesecake, so I gave him the label. He scanned it quickly and remarked, "sounds like a chemistry set!" In order to achieve the uniformity and shelf-life required by such huge organisations as supermarkets, a whole variety of stabilisers and preservatives have to be added, which I can't imagine contribute vastly to the nutritional content of the product.

It seems worse in America, for some reason; I still haven't got over the fact that regular cheddar and such is invariably labelled "natural cheese", which is necessary to distinguish it from the processed cheese slices that have a texture little different from their plastic wrapping (although they are not, I've noticed, labelled "unnatural cheese"). A whole raw chicken for roasting proudly proclaimed that it was "minimally processed" - well, you'd hope so! But this is a land where a certain fast-food chain ran adverts showing that you couldn't buy the ingredients for its fried chicken for anywhere near the price it was selling it at. This didn't make me want to rush out and buy it, but rather raised the question, "what on earth do they make it out of then?" Some kind of super-processed chicken?

Anyway, back to our genuine home-made scratch-baked minimally-processed no-preservatives-added lemon meringue pie. Graham made the pastry and meringue, I provided the lemon filling and overall direction (ie reading the recipe book), we entertained ourselves with a game of tennis on the Wii while it was baking, and very shortly we had ourselves one very presentable and delicious pie to eat! Preservatives were definitely not needed, as it vanished remarkably quickly. 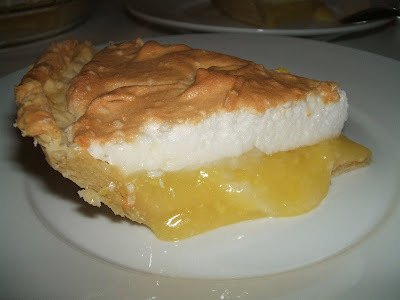 John Evens said…
Yay! Food! The Calzone is quite popular here, which is a pizza folded in half a bit like a cornish pasty (although no-one know whether or not you pronounce the 'e', as you would in Italian). The name 'Stromboli' rings a bell, but I couldn't have told you what it was and I'm sure I never eaten one. Kristal got a book at the library called 'The New Best Recipe', which is a huge tome of 1000 classic recipes that have all been exhaustively researched to find out what ingredients and techniques really work the best. So far it has provided for tip-top pound cake & pork stirfry. We're testing out the turkey burgers made with ricotta tonight!
Love John
24 March 2009 at 16:57

Anonymous said…
Here are some more lemony drink recipes. They may be useful as you head towrads summer. We have a lemon tree in the garden so I have a few. One of my favourite is homemade lemon curd - especially good as a filling for cakes, biscuits and meringues. Anyway here are the drink recipes:

LEMON SQUASH
1 cup lemon juice, preferably Lisbon type; 11⁄2 cups sugar
Put juice and sugar in a stainless-steel bowl and rest the bowl inside a saucepan of water. Bring the water to the boil and simmer until the sugar has dissolved and the mixture is hot but not boiling. Cool and pour into bottles stored in a cool place.
LEMON BARLEY WATER
1 heaped tbsp pearl barley; 4 cups water; 1 large lemon; 2 tbsp sugar
Put the barley in a saucepan with the water. Use a potato peeler to cut a curl of zest from the lemon. Add this to the saucepan. Bring to the boil and simmer for 1 hour. Strain through a sieve and add the lemon juice and sugar.
27 March 2009 at 02:09