January 26, 2009
On Saturday the Firestone Cares team (a couple called Greg and Sheri, who organise social events for the apartment block) put on a "Soup Off" competition, and we decided to enter. We had a flick through some recipe books and decided on carrot and orange soup, a standard cook-veg-and-blend type soup which might come to mind if you thought "home-made soup". We were told to bring a sign to identify it, too, so wrote the name in large capital letters on a sheet of A4, and took it, along with our saucepan of soup wrapped in a towel to keep warm, over to the clubhouse. 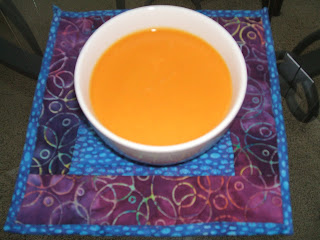