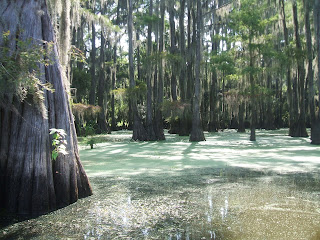 This is a somewhat belated post about our Labor Day weekend away at Caddo Lake, on the Texas - Louisiana border. I've just got the photos up on Facebook which tells most of the story:

It was fun to be camping again - I haven't done that for ages, but I've always enjoyed camping since we had a trailer tent when I was younger. In the States, of course, keeping cool is more of a problem than keeping warm, and the countryside is populated with lots of nasty bugs who thought of me as a tasty picnic. For some reason Graham tastes bad to them, which is totally unfair!

We were right on the border where Arkansas, Louisiana and Texas meet, so we drove around a bit just to say that we'd visited each state. To be honest they looked a lot like Texas.

We camped near a little place called Uncertain (which must give rise to endless puns) but the nearest interesting town is a place called Jefferson, which used to be a big inland port - paddle steamers would come all the way up the Red River from New Orleans. In fact Jefferson supplanted a place called Caddo Landing as a port, which used to be pretty much where we were camping, as far as I could tell. It was founded, grew to be a bustling port, and faded away again to the point where there's nothing left in some ridiculously short time - about 60 years! It seems incredible from an English point of view.

It was a good weekend and great to see something which you just can't see in the UK. We just don't have that kind of lake.